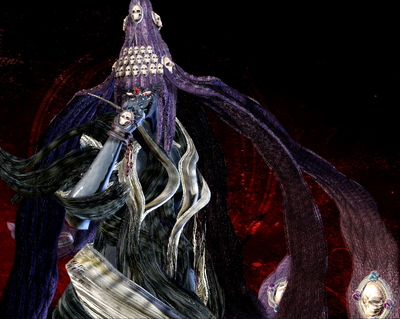 Queen Sheba is the Infernal Demon tasked with the role of the ruler of Inferno. She is portrayed as a darker, yet much more massive version of Jubileus with similar powers. When the cosmos was split into light, darkness and the chaos in-between, the incredibly powerful Sheba was born alongside the darkness controlling the world of Inferno. She lives in the hellish land, and is often classified as a demon yet the full details of her existence are unknown. It is said that no witch can attempt to summon Sheba like other Demons - the power needed is too great and therefore kills the witch in the process. However, it seems that the equal powers of two witches is enough to summon Queen Sheba, without suffering any further damage.

Age: At least billions of years old (Older than the universe)

Lifting Strength: Class P via powerscaling (Should be comparable to Aesir)

Durability: Large Star level (Equal to Jubileus, who can shrug off being punched by Queen Sheba hard enough to shatter any planet in the solar system on impact after a long fight with Bayonetta like it was nothing) | Universe level

Standard Equipment: The Left Eye of the World | None notable

Weaknesses: Can only be resurrected using the Eyes of the World, and is significantly weaker in this state | None notable