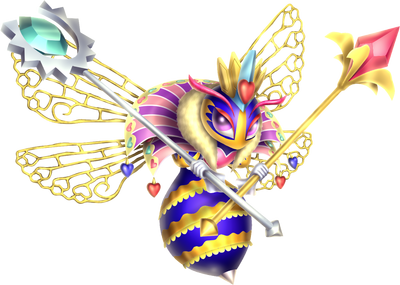 Queen Sectonia is the final boss of Kirby: Triple Deluxe. She's a power-hungry and half-crazed tyrant who planned to take over Floralia, and then later, Popstar. To ensure that nobody would challenge her rule, she imprisoned the People of the Sky and built an army of magically created minions to guard her palace. In a last-ditch effort to save themselves, the People of the Sky devised a seed and sent it tumbling toward the land below, which so happened to be Dream Land. This seed was designed to grow into the Dreamstalk, and bring the hero of Dream Land up to Floralia to save its people. Seeing this, Queen Sectonia ordered Taranza, her partner, to go down there and kidnap the hero to prevent such a fate. Unfortunately, Taranza mistook King Dedede for the hero and took him instead, leaving Kirby to give chase and eventually defeating her.

Classification: Tyrannical Queen, She Who Holds the Stars

Powers and Abilities: Superhuman Physical Characteristics, Flight, Energy Manipulation, Immortality (Types 1 & 6. Was going to sustain her own life for eternity), Magic (Can create diamonds, disc boomerangs, soldiers, ect.), Portal Creation, Mind Manipulation, Corruption (Implied that either Sectonia or Taranza corrupted Coily Rattler), Electricity Manipulation, Teleportation, Darkness Manipulation, Skilled Swordsman, Forcefield Creation, Danmaku, Absorption, Possession & Fusionism (Able to "leech" power from other life-forms until they are weak enough to be controlled. Merged with the Dreamstalk. Her bee-like form is a body that she took over through the use of her magic) | Same as before, Complete manipulation of the Dreamstalk, Fire Manipulation, Body Manipulation (Is capable of changing her body into living paint), Summoning, Regeneration (High-Mid. Can reform from dividing into multiple sentient drops and having an unspecified amount of them destroyed), Immortality (Type 1, 3 & 6)

Stamina: Absurdly high, fought with Kirby several times, survived her own beam being shot back at her by Hypernova Kirby and still had enough energy left to fight with Kirby two more times. Kirby fought her five times before she finally went down for good.

Range: Standard melee range physically, interstellar with projectiles and shockwaves | At least Planetary (Under her influence, the Dreamstalk's vines covered all of Pop Star, supplying her with energy from all over the planet. Considering the fact that she can attack through the flowers that grow on the vines, it's not a stretch to say she could attack nearly any place on the planet. For reference, Pop Star is so large that its stratosphere alone contains a giant moon), interstellar with projectiles and shockwaves