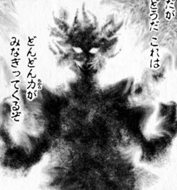 Queen Metalia is one of the Chaos-Spawn, manifestations of Chaos whose purpose is to tear up reality at the seams. Queen Metalia is an energy mass of pure evil born from the Sun that manipulated the people of Earth against the Moon and brought an end to the Silver Millennium. Though Metalia was sealed away in D-Point by Queen Serenity in her final moments, the entity devastated the Earth as it began anew. But the seal was undone by a reincarnated Queen Beryl and Metalia, replenishing her strength through energy gathered by the Dark Kingdom, and sought the Legendary Silver Crystal to once more envelop the Earth and spread her influence across the cosmos.

Age: Billions of years old (Predates the Evolution of life on Earth)

Powers and Abilities: Superhuman Physical Characteristics, Flight, Teleportation, Incorporeality (Literally made out of darkness), Intangibility, Immortality (Type 1 & 3), Regeneration (At least Low-High, possibly Mid-High: To defeat Metalia Sailor Moon had to reduce her to a "dark speck of dust"), Darkness Manipulation (Metalia made the entire Sun go dark, she can also absorb entire planets into her darkness), Air Manipulation, Weather Manipulation (Metalia's presence on Earth created winds so intense and cold that it caused a state of emergency across the globe), Size grows in relation to the amount of energy she absorbed, Energy-Sensing (Metalia can sense the energy of beings on the surface from Deep Underground and was able to sense the energy of individual beings), Energy-Draining (Metalia absorbed energy on the surface from deep underground and was able to absorb an energy attack to her face where her weak point was), Petrification (Metalia can turn entire kingdoms to stone), Resurrection and Power Bestowal (Metalia revived Mamoru and gave him greater dark power), Brainwashing (Metalia's awakening caused humanity to go insane, and she later hypnotized them to serve her), Illusion Creation (Can transmit images to others psionically), Self-Sustenance (Type 1, 2 & 3), Telepathy, Her Mere Presence can cause beings to go blind, Magic, Existence Erasure, Earth Manipulation, Spatial Manipulation (Her presence warps space), Absorption (She is able to absorb people), Resistance to Soul Manipulation and Purification (She was not affected by the spiritual attack of Sailor Mars), Large Size (Type 5, potentially Type 6)

Attack Potency: Varies depending on what size and state she is in her development which is dependent on the amount of energy she has absorbed ranging from Below Average level at her weakest to possibly Universe level at her peak (Could kill Queen Serenity, and she was implied to be a threat to all of creation at her peak[1]) | At least Multi-Continent level, likely Large Star level+ during her battle with Sailor Moon (Was causing tectonic shifts in her dormant state[1], Metalia Covered the Earth with her Darkness and continued growing in size, and was a massive threat for Sailor Moon[2])

Speed: Massively FTL+ during her fight with Sailor Moon

Stamina: Effectively Infinite (Does not have a physical body to tire, being a living mass of darkness)

Range: At least One Stellar Diameter

Weaknesses: The Star-like diamond mark on her forehead[2] is a weak point that can be attacked by holy light attacks like Sailor Moon's.[3] Intense enough lights can physically repel or push away Metalia's form such as when Sailor Moon made the Whole Moon glow with the intensity of the Silver Crystal.[3] She prefers to emotionally torture sentient beings than kill them[2] since in their despair they release more energy for her to consume.

Metalia is a being of darkness and can manipulate it. DK Metalia can absorb entire planets into her darkness.

Queen Metalia was a demon from the Sun that could absorb all energy and use it to expand her body and power. The more energy she gains, the further she can spread her dark body to wrap around the whole planet. Innocent people could then fall under her influence, turning them violent and attacking one another. 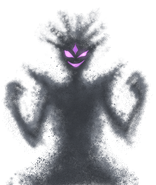