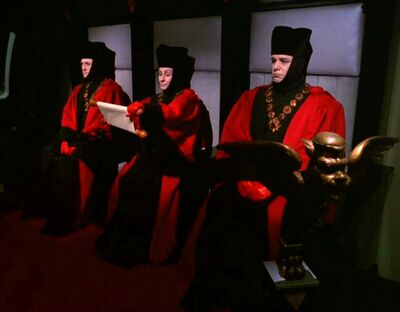 Living in a state of near total static, the civilization known as the Q Continuum have existed possibly forever outside of time and space in a realm outside the multiverse, having "always been and always being," according to their own words. Having "experienced and done all that there is to do or see," they live in equilibrium, only doing anything out of boredom or fancy. When one Q, Quinn, decides that he is sick of this placid existence, he deems it fit to commit suicide, a declaration that sparks great outcry and sends great rifts throughout the whole of the Continuum, leading to a bloody civil war that does massive damage to the space-time continuum, but finally introduces change into their previously stagnant existence.

Population: At least thousands of individuals

Territory: The entirety of the space-time continuum and beyond; potentially all of existence

Attack Potency: Hyperverse level (The Q Continuum as a whole exists in a nexus outside of the space-time continuum as a whole, and consists of thousands or possibly even hundreds of thousands of Q working in tandem, multiplying their collective power by an incalculable amount. Can effortlessly remove or completely nullify another Q's powers, as well as grant or give powers to those whom they collectively deem worthy of such. Q Weapons ignore conventional durability)

Power Source: Unknown, they can likely generate their own energy

Durability: Hyperverse level (An individual Q was not capable of affecting the Continuum at large in any feasible way. Even damage from Q Weapons was completely negated at their behest, and did not damage their realm whatsoever. Contains the combined durability of at least thousands of Q)

Weaknesses: Q-Weapons are weapons made by other Q, which rupture the fabric of space-time itself. It is stated these weapons can kill the Q, but this was never demonstrated, and Quinn, a rogue Q, could not kill himself until his powers were removed. This would suggest these weapons have some degree of Power Nullification, immortality nullification, and regen nullification.

Note: This profile only covers the race and civilization of the Q as a whole. For the eponymously named character, see Q (Star Trek). For the fusion between Q and the wormhole-alien Prophet from DS9, see Q-Prophet.