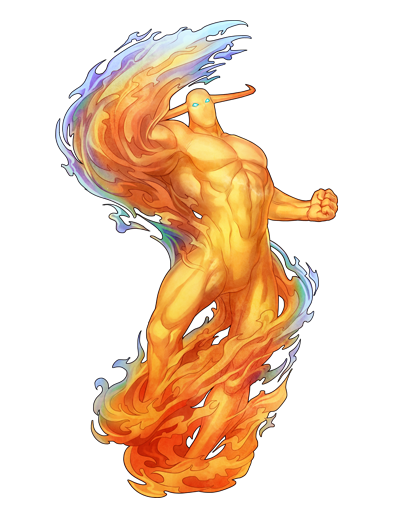 Pyron is an ancient cosmic being belonging to the Darkstalkers universe. Born from the planet Hellstorm, he evolved into a cosmic being of pure energy and power.

With this new form, Pyron searched the universe, to other stars and galaxies in search of planets to drain. One world that gained his attention was Earth. Pyron created his own loyal robot follows called Huitzil Robots. These machines were to kill the dinosaurs and monitor Earth's development and notify their creator when it had populated with beings worthy to be devoured. Pyron then left the planet to develop while searching for other planets to consume. Countless other planets and species were said to be devoured by Pyron but Earth was planned to be the most delicious.

65 million years later Pyron is seen in space talking to one of his Huitzil Robots which informs that Earth is ripened and beings worthy to be consumed.

Gender: Unknown, but referred to as a male

Attack Potency: Dwarf Star level (He can casually wear planets as rings and even in his 'humanoid' form can destroy a planet with ease. Stronger than Depowered Demitri) | Galaxy level (Holds and controls an orbital path of 400,000 lightyears, twice the size of the Milky Way)

Speed: Massively FTL+ (He is superior to Huitzil and can casually fire flaming, sun-like spheres that can circle around the planet many times in a matter of seconds) | Massively FTL+

Durability: Dwarf Star level (Tanked hits from Demitri) | Galaxy level (So large that he holds and controls an orbital path of 400,000 lightyears)

Weaknesses: Pyron is made of pure energy and can be absorbed, he is quite overconfident and often limits his power and form on purpose to enjoy fighting, and is vulnerable to Soul Manipulation.