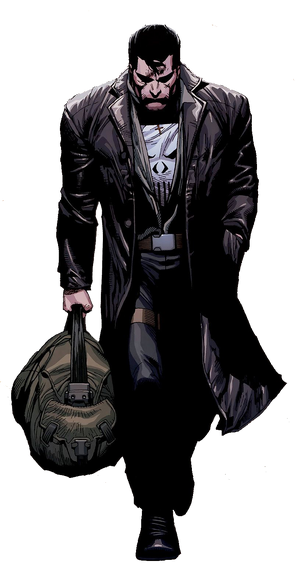 One of the NYPD's finest, Frank Castle refused to stand by while his partner and other officers took bribes from the mysterious underworld figure known as the Owl. Turning them in to Internal Affairs, Frank made himself a target -- the officers he exposed sought revenge, gunning Frank and his family down while they were on a picnic in the park. The sole survivor, Frank became the twisted, murderous vigilante known as the Punisher.

Attack Potency: Wall level (Shattered through a human skull with the back of his gun and violently fragmented a wooden door), Small Building level with piercing weapon (Harmed Spider-Man)

Stamina: Above average (Can remain in gunfights for extended durations)

Standard Equipment: The Punisher employs a vast array of conventional firearms including machine guns, rifles, shotguns, handguns, knives, explosives and other weapons culled from common and organized criminals and military sources during his operations.

Intelligence: Above Average (Is an extremely talented detective, and has received training as an New York Police Department to be a skilled police officer.)