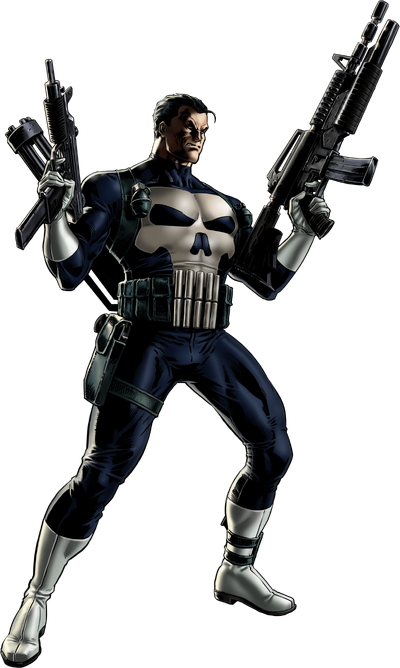 The Punisher is a violent vigilante from Marvel Comics. Driven by the death of his family, he hunts down criminals and kills them in brutal ways, and is also known to use intimidation or torture.

Tier: 9-A, higher with Heavy Weaponry

Attack Potency: Small Building level (Can significantly harm the likes of Daredevil with all standard human weaponry up to rocket launchers. Can fight people who can harm him), higher with Heavy Weaponry

Intelligence: Above Average. Multi-disciplinary military training from the U.S. Marine Corps, the U.S. Army and Navy. Proficient in basic infantry skills, special operations, including the use and maintenance of specialized firearms and explosive ordnance. Highly trained in infiltration into heavily-guarded enemy territories and structures for the purpose of assassination, captures, and military intelligence, in addition to an intimate knowledge of criminal movements and behavior, as well as keen tactical and strategic abilities, he is also thoroughly trained and experienced in unconventional ("guerilla") warfare. He is an armorer, a gunsmith, and an expert in field medicine.

Weaknesses: None in particular

Note 1: Before making any changes to this page, please read and follow the Power-scaling Rules for Marvel and DC Comics

Note 2: This profile only covers the human version of the Punisher, not "Frankencastle"