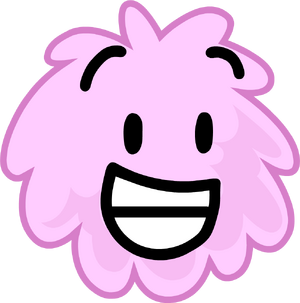 Puffball is a contestant who made her debut in Battle for Dream Island Again. She seems to be a strange character, having a vocoded voice and strange dream of wanting to lose her flight ability just to have limbs (even if it is for a day), but acts nice to her team.

Powers and Abilities: Superhuman Physical Characteristics, Toon Force, Breaking the Fourth Wall (Was able to change the shape of the screen alongside with the rest of the contestants), Inorganic Physiology (Type 1), Self-Sustenance (Type 1) (Can breathe in the vacuum of space), True Flight, Rainbow Vomit, Size Manipulation, Regeneration (Mid-Low, Got burnt by Firey and was fine a few seconds later), Hypnosis (Put Firey into a trance upon her singing), Resistance to Extreme Cold and Cosmic Radiations (Unaffected by the extreme conditions of space)

Speed: Massively Hypersonic+ (Flew from space back to Earth in roughly a minute) with Sub-Relativistic attack speed via powerscaling (Comparable to Coiny, who could throw a stick 2,760 miles in a second)

Durability: Large Town level+, possibly City level+ (Should be able to tank blows from those comparable to her)

Stamina: Very High (Flew from the Plains to Yoyleland for 2 days without seemingly tiring out)

Weaknesses: Puffball can tend to be selfish and arrogant at some points

Sonic Boom (Skylanders) Sonic Boom’s Profile (Speed was equalized, both were 7-B, and both were willing to kill)