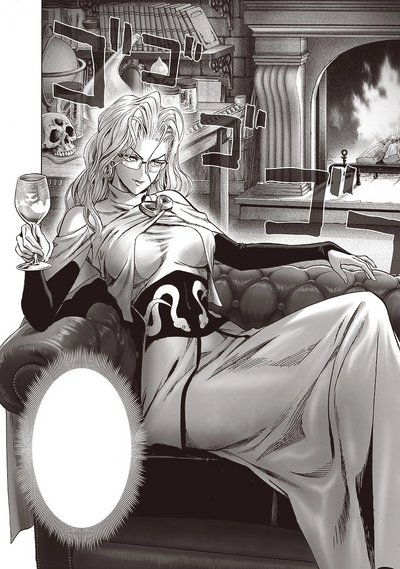 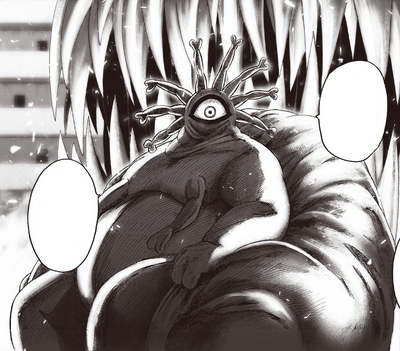 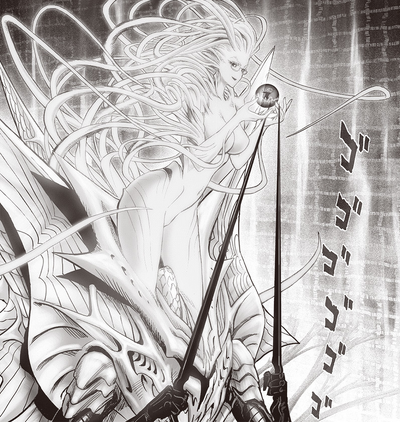 "Third Eye" Psykos (サイコス, Saikosu) is a former friend of Fubuki that turned into a monster within One-Punch Man. She used to be the soft-spoken, dorky colleague of B-Class Fubuki that wanted to make use of her telekinetic powers to help the world. But ever since a horrifying vision of the future led her to insanity, she became the terrifying leader of the Monster Association, a group that boasts some of the mightiest Dragon level threats in the world, of which include herself. Her power is on a level that seemed to gain some respect from Orochi.

Attack Potency: At least Small City level+ (Able to pin down, harm and prevent Garou from moving before he adapted to her telekinesis, should be above other Dragon level threats) | City level (Said that her Gyoro Gyoro form doesn't even begin to compare to her now. Enhanced her powers with a serum) | Small Country level+ (Subjugated and fused with Orochi. Gave a more difficult fight against Tatsumaki and wounded her)

Standard Equipment: A meat puppet that she controls remotely | None notable

Intelligence: High, led the Monsters Association in secret and is one of the few monsters that survived a confrontation with Tatsumaki. Knows how espers work and their weaknesses and with this was able to harm Tatsumaki and weaken her greatly this way.

Weaknesses: Prone to rage and fits of insanity. Telekinetic attacks can be diverted if the opponent knows how to. Not as versatile as Fubuki.

Skilled Psychic Combatant: Since obtaining her powers under Fubuki, Psykos has greatly improved the strength of her abilities. However, she still has less experience and expertise than Fubuki and Tatsumaki, which is why she lost to Fubuki even though she had a greater psychic output.