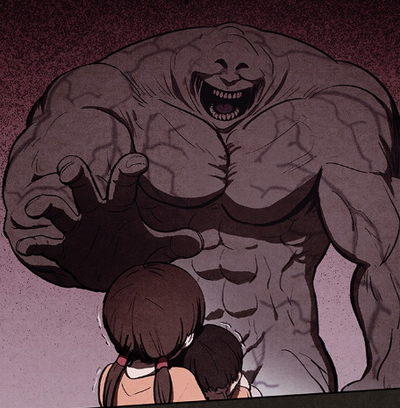 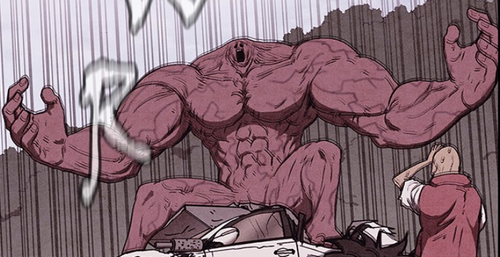 A monster born out of the desire to become stronger, its human form was not known before its transformation. For whatever reason however, their wish was to be the strongest, and it led to its new form.

After fighting with the main cast it was thrown off a building, and after being stabbed, electrocuted and put on fire it was in enough stress to further "evolve", although with a newborn fear for katanas.

Age: Unknown, likely at least in its twenties

Powers and Abilities: Superhuman Physical Characteristics, Technology Manipulation (Makes communication devices like phones and radios malfunction), Large Size (Type 0), Regeneration (Low-mid), Resurrection (Even after being killed, it will resurrect in a few hours to at most a few days, depending on the level of damage), Immortality (Type 2, 3 and 4), Adaptation and Reactive Evolution (Under duress and stress monsters can evolve into stronger versions of themselves), Multiple Personalities (The human part of its mind is "sealed" into an eternal dream where he can be happy forever)

Attack Potency: Wall level (Punched the ground hard enough to shake a 15 story building) | At least Wall level (Far stronger than before, completely crushed a person by hitting them, easily crushed a reinforced car by just jumping on it and broke through a wall by running into it)

Intelligence: Low, it seems to have lost most of its ability to think, seemingly believing humans are protein, and wanting to get stronger at any cost.

Weaknesses: Heat can negate its regeneration temporarily due to its cells being made of protein, fully burning its corpse will keep it dead, and it is very simplistic in mentality. Normal gas fire can hurt it regardless of its durability, and it doesn't seem to be able to adapt to it. | Same as before, afraid of katanas.

Retrieved from "https://vsbattles.fandom.com/wiki/Protein_Monster_(Sweet_Home)?oldid=5430880"
Community content is available under CC-BY-SA unless otherwise noted.