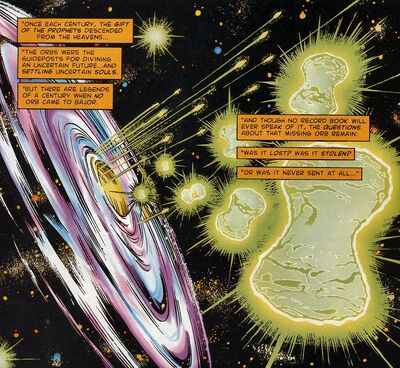 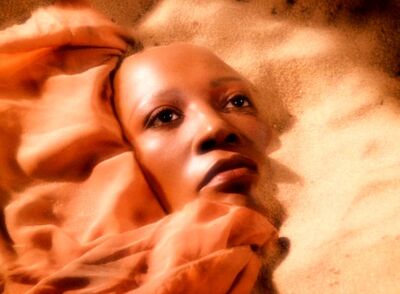 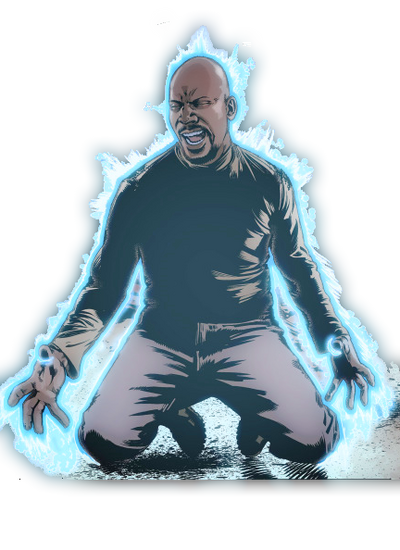 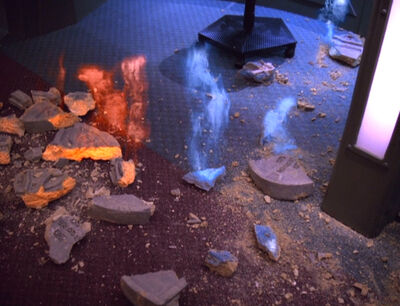 The Prophets of Bajor, also known as "wormhole aliens", were non-corporeal extra-dimensional entities that resided in the only stable wormhole known to exist. Their origins unknown, the Prophets have been proven to possess exceptional abilities. In their natural state, they appeared as blue translucent energy capable of instantaneous movement throughout any environment. When communicating with visitors in their own domain, the Prophets were able to take the appearance of someone familiar to them by probing their consciousness. When first encountered in "person" by Starfleet Commander Benjamin Sisko in 2369, the Prophets appeared to take the form of people from his past and present – including his wife and son Captain Jean-Luc Picard, Kai Opaka, and others. With few exceptions, in realspace, the Prophets could only physically communicate with outsiders by possessing a body and using it as a vessel. The host was conscious of what was happening but had no control over its actions. The Prophets had no sense of linear time, so it was likely that they lived outside of the normal space-time continuum; however, their existence was recorded on Bajor for at least thirty thousand years.

In 2331, a Prophet traveled to Earth and possessed the body of a Human named Sarah. The Prophet Joseph Sisko and conceived a child - Benjamin Sisko. Sarah later vanished and died. It was no coincidence, then, that first contact by the Federation was made by Starfleet officer Ben Sisko inside the Wormhole in 2369. The Bajoran people celebrated the event and named Sisko as the Emissary of the Prophets. He then took up a position commanding a joint Bajoran/Federation space station at the mouth of the wormhole, named Deep Space Nine.

Sisko initially was reluctant to accept such a prominent religious position, but this changed in 2372 when the Prophets sent a 22nd century Bajoran, Akorem Laan, two hundred years into his future, where he was accepted by many Bajorans as being the true Emissary since he discovered the wormhole first. Akorem encouraged draconian reforms on Bajor that Captain Sisko knew would affect its membership application to the Federation. After experiencing a lapsed vision, Sisko realized the significant influence the Emissary had on Bajoran society, and so challenged Akorem and took him to the wormhole to ask the Prophets who was the true Emissary. The Prophets said Sisko was of Bajor, and returned Akorem to his own time.

In 2373, a Pah-Wraith, demonic entities who were said to be of a similar nature to the Prophets, escaped their Fire Cave prison by possessing a member of an expedition team, Keiko O'Brien, who traveled to Deep Space Nine and attempted to kill the Prophets before re-entering the wormhole. The Pah-Wraith failed, and due to its exposure to realspace, was killed when exposed to chroniton radiation.

Upon becoming obsessed with killing Sisko and destroying Bajor, Gul Dukat (the former leader of the Occupation) studied ancient Bajoran prophecies to uncover a way to carry out this objective. He began to worship the Pah-Wraiths, and led a cult that believed them to be the true Prophets of the wormhole. Later, he was able to release a Pah-Wraith trapped inside an ancient Bajoran artifact. The freed Pah-Wraith used Dukat's body as a vessel and traveled to DS9, where it was exposed to an orb after attacking Starfleet officer Jadzia Dax, who later died of her injuries. Using the orb, the Pah-Wraith was able to enter the wormhole and seal it, turning all known orbs in the Bajoran's possession dark and inactive. A major struggle erupted inside the wormhole between the two powers for its control. Believing he had failed both Prophets and Bajorans, Sisko returned to Earth to re-evaluate his future. Later, he experienced a series of visions urging him to travel to the planet of Tyree. In an attempt to confuse him, the Pah-Wraith also sent him misleading visions. However, he was successful in discovering the tenth orb which, once opened, had the power to expel and destroy the Pah-Wraith, returning the wormhole to the Prophets' control. A Prophet in the shape of his mother appeared to Sisko and explained how he was conceived and why he was of Bajor, telling him he was the only one who could carry out their tasks.

By the end of 2375, Dukat was able to manipulate the Kai of Bajor, Adami Winn with the aid of visions sent to her by the Pah-Wraiths. With her help, they studied the ancient Book of the Kosst Amojan, which gave them instructions on how to release all of the imprisoned Pah-Wraiths from the Fire Caves. Sisko completed the plans set out for him by the Prophets by destroying Dukat and the text. All the Pah-Wraiths remained imprisoned in the Fire Caves, while Sisko was taken into the wormhole to reside with his own people as a Prophet. However, he promised his wife and son that he would return one day.

The Last Prophet appears in the end of IDW Comics' "The Q Gambit", where all but one of the Prophets have been wiped out by the Pah-Wraiths, and the surviving Prophet is trapped in the tablet that was used for the religious event known as the Reckoning. In the course of their time in the future, this Prophet is released and possesses Spock, who realizes that the power of the Pah-Wraiths can be overcome if the Prophet possesses Q, elevating Q's power to an even further level.

Powers and Abilities: Reality Warping, Higher-Dimensional Manipulation, Possession (Can inhabit the body or vessel of any living being), Energy Manipulation, Teleportation, Telepathy, Telekinesis, Non-Corporeal, Nigh-Omniscience, Illusion Creation, Shapeshifting, Mind Manipulation (Can reach inside the minds of those who enter the Wormhole and access even their darkest secrets), Regeneration (Low-Godly), Immortality (Types 1, 3, 5 and possibly 9), Intangibility, Causality Manipulation (Time does not exist in their realm and they are capable of halting or changing the causality of events at will), Can survive in space, True Flight, Time Travel, Precognition, Clairvoyance, Vector Manipulation (Can halt ships' movement entirely), Fate Manipulation (Guided Sisko to be their Emissary from the moment of his very birth and before), Conceptual Manipulation (Controlled all concepts within their space, though those from other domains were sometimes alien to them), Dream Manipulation (Can appear in dreams often to those who they take an interest in), Acausality (Type 1; Cannot be affected by the actions of those outside the Wormhole and exist outside of linear time), Sealing (Can seal the Wormhole at will and trap opponents in it eternally. Additionally, sealed the Pah-Wraiths within the Fire Caves), Dimensional BFR (Can banish enemies who wander into the Wormhole into oblivion), Power Bestowal (Can transfer their own abilities to either hosts or those of their choosing), Blessing (Can bless those who are loyal to them with special boons), Resurrection (Should have the same abilities as the Pah-Wraiths, who were able to revive Dukat) | The same to a weaker degree, lacking all acausality/time based resistance, as well as possible additional Immortality (Type 8) | The same to a far higher degree, as well as likely Regeneration (Mid-Godly) (Should be equal to the Q), Fusionism and Existence Erasure

Attack Potency: At least Low Complex Multiverse level (Within the Wormhole, the Prophets of Bajor are considered all powerful. They have full control of the extra-dimensional realm the Wormhole gives access to via subspace through it, and transcend space and time, having no knowledge of causality or events occurring, as time is a lower-dimensional concept they feel they are above. With time, they come to understand Sisko's explanations of causality, but they are most effective when in their own realm. Furthermore, even if the Wormhole were to be destroyed, their higher-dimensional realm would not be) | Universe level (While they are weakened outside of their home domains, they should still be far more powerful than the Pah-Wraiths, who were stated to be capable, if released, of "burning the universe in their wake", with none able to stop them) | Hyperverse level (Should be comparable to the likes of the Pah-Wraiths and Q; when joining with the latter the two fuse to become the Q-Prophet, the most powerful entity currently known in the Trek canon)

Durability: At least Low Complex Multiverse level (Unaffected by any phenomena and are all-powerful within their own realm) | Universe level (Only able to be stopped or slowed down through the 4-dimensional time-warping effects of chronitron radiation. However, it is possible that) | Hyperverse level (Unable to be destroyed even by the likes of the empowered Dukat, who had taken a multitude of Pah-Wraiths into himself and transcended his previous plateau of power)

Intelligence: Nigh-Omniscient (Knew of all the happenings in the multiverse, though their higher-dimensional nature prohibited them from understanding some of the more subtle aspects of reality happening at any given moment)

Weaknesses: None notable | Chronitron radiation, which is a time-based byproduct contaminant of an experimental cloaking device power source used by the Romulan Star Empire (heavily linked to linear time travel, something they are unfamiliar with and have likely not evolved to deal with), can weaken/suppress the Prophet's power over someone and drive them away, and can kill their weaker Pah-Wraith cousins, bypassing normal durability. | None notable

Start a Discussion Discussions about Prophets of Bajor