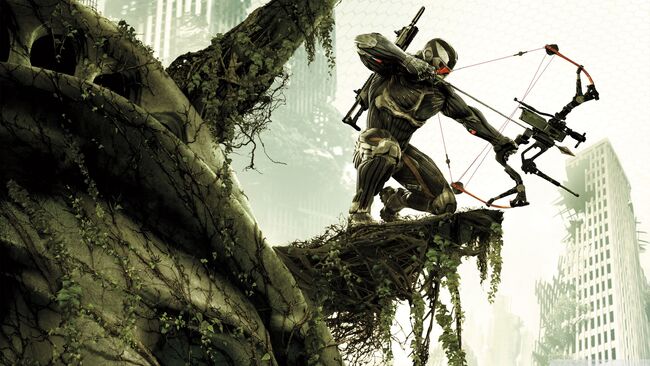 Major Laurence "Prophet" Barnes is the squad leader of Raptor Team during the events of Crysis on the Lingshan Islands and a major character in both Crysis and Crysis 2. A copy of his personality and memories returns as the protagonist in Crysis 3 within the Nanosuit 2.0.

Age: Unknown, possibly above his 40s

Powers and Abilities: Superhuman Physical Characteristics, Enhanced Senses, Master Fighter (Due to his extensive experience during the War on Terror and several undercover CIA missions), Information Analysis (Via visor), Precognition (Had multiple visions of the Alpha Ceph destroying Earth if he were to fail), Self-Sustenance (Types 1, 2 and 3), Adaptation, Absorption (Can absorb various forms of energy to grow vastly stronger and sustain himself for as long as he likes, and as a result he can even thrive underwater and potentially in space), Weapon Mastery, Vehicular Mastery, Fire Manipulation (via several fire-based and thermite weapons), Immortality (Types 1, 3, 6 and 8 his consciousness was stored within the Nanosuit, and upon taking over Alcatraz willfully, Alcatraz fully morphed into Prophet. As long as the suit can regenerate, Prophet too, will regenerate along with it), Resurrection, Explosion Manipulation (via explosive weapons), Smoke Manipulation (via smoke grenades), Cloaking (Bending lensing fields and warped lights and blending him into the surrounded environment), Hacking (Can easily hack into Earth and Ceph technology), Statistics Amplification (With each respective modes such as Maximum Power, Armor and Cloak Engage, the Nanosuit 2 can fuse and link with his body to the last molecule), Regeneration (At least Mid-High. It can even regenerate any damaged parts of his body using expandable biomass with Cry-Weave, its nanoshell can also self-repair if it suffers any kind of damage, like his re-entry into the Earth's atmosphere which completely destroyed him and the suit as seen in the ending of Crysis 3 after he crash-landed into Lingshan), Energy Manipulation and Energy Projection (after absorbing Ceph energy sources the suit can also become significantly stronger by absorbing Ceph's energy, channeling and unleashing them in the form of energy blasts), Telekinesis, Reactive Evolution, Reactive Power Level, Multi-Lingualism, Shapeshifting (Upon its complete destruction, the Nanosuit 2.0 reformed itself and restored Prophet's former human appearance) and Resistance to Poison Manipulation, Disease Manipulation, Electricity Manipulation (The nanonites inside the suit will preventing any disease and virus from effecting him by blocking and reprogramming them at nano-scale, featuring hardened Faraday anti-EMP mesh, the Nanocatalyst it absorbed allowed Alcatraz to unlock new features and making him stronger day-by-day, His linguistic skills increased significantly, memory becomes eidetic and functionally ambidextrous thanks to Nanosuit 2), Hacking (Can thwart back hackers and hack them back), Radiation Manipulation (Can absorb radiation as a power source) and Extreme Cold and Heat (The nanoshell of the suit allows him to survive any imaginable and extremely harsh environment, ranging from the vacuum of space to several thousand degrees of heat gained upon re-entry into the Earth's atmosphere), Madness Manipulation (Types 1, 2 and 3), Mind Control, Mind Manipulation, Illusion Creation (Repeatedly resisted the efforts of the Hive Mind to control him and ultimately turned the tables by completely dominating the Hive itself) and several other resistances

Attack Potency: At least Small Building level initially (Can perform the same feats as Alcatraz), at least Planet level, possibly Star level by the end of the game (Upon fully evolving and surpassing his limits, he defeated the Alpha Ceph all by himself)

Speed: Supersonic with High Hypersonic reactions, possibly higher initially (Should not be much slower than Alcatraz with the Nanosuit 2), at least Massively Hypersonic+ by the end of the game (Kept up with the Alpha Ceph)

Lifting Strength: At least Class 50 initially (Easily pushed a giant train carriage and got it moving at top speed despite the train itself being stuck into place with over decades of rust), at least Class K+ by the end of the game (Fought against the Alpha Ceph)

Durability: At least Country level (Due to the events of Crysis 2), at least Planet level, possibly Star level by the end of the game

Stamina: Extremely High initially (Can keep up in decade-long fights and remain in stasis for longer, while also being tortured in this state and not given any food or water, and then suddenly get back up and start fighting at peak potential as if nothing happened to him), Infinite by the end of the game

Range: Extended melee range by himself and via shockwaves, higher with weapons, several kilometers via Ceph Spike and Lithoship

Intelligence: At least Genius (Tapped into the resources of the Ceph army and absorbed all their knowledge and experience. Is a tactical genius far beyond the smartest of human generals)

Weaknesses: Same as Alcatraz, but to a significantly lesser extent, no longer possesses the possibility of being corrupted by outside forces unlike Alcatraz. None notable by the end of the game

Notable Attacks/Techniques: Same as Alcatraz, albeit to a significantly higher degree.