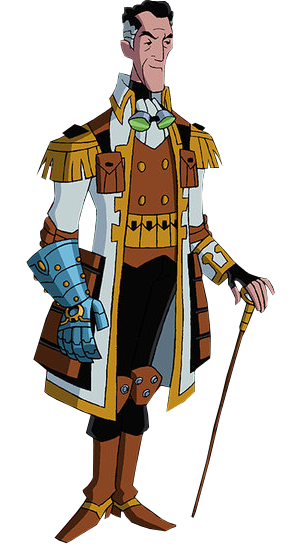 Professor Paradox is the alias used by a time travelling professor who can travel anywhere in space or time, within reason. While he forgot his true name from centuries being trapped in a separate reality, he now goes by the name "Professor Paradox," after taking a liking to being referred to as such.

Tier: At least 7-A, likely higher physically, 4-A with his powers, 2-B with the Chrono Navigator

Powers and Abilities: Superhuman Physical Characteristics, Time Manipulation, Spatial Manipulation, Time Travel (Due to his time in entrapment for several millennia, Paradox has an in-depth understanding of the space-time continuum. This allows him to travel to any point in space and time, as well as manipulate time as he pleases), Immortality (Type 1, Paradox's time travel powers have left him biologically immortal), Skilled Cane Wielder (With his cane, Paradox fought against Eon and won), Immunity to Time Manipulation (Due to his nature of existing outside of time, time-based powers cannot harm him), Acausality (Type 1; Exists outside of time, was unaffected when his timeline was destroyed by the Chronosapien Time Bomb), Teleportation (Repeatedly teleports from one place to another, easily teleported himself and Ben's team to outside of the universe), Age Manipulation (Changed Kevin Levin's age back to normal after it was accelerated by the Trans-Dimensional Monster), Flight, Pocket Reality Manipulation (Holds control over his pocket dimension, which he can change at will), Electricity Manipulation with his cane, Reality Destruction with the Chrono Navigator (If misused, the Chrono Navigator can destabilize space-time to the point that "all of existence", including parallel universes that branch off "ad infinitum", would be destroyed), Portal Creation (Can open portal to other universes), Preparation (Due to being such an advanced scientist, with preparation time, he created many powerful technologies, including the Chrono Navigator and the Perplexahedron), Sub-Atomic Manipulation with sufficient preparation time (Created the Chrono-logger, which he described as a "subatomic drill designed to bore a tunnel in the fabric of space-time"), Resistance to Heat and Cold (Caused Ben's team to not feel discomfort from heat and cold), BFR

Attack Potency: At least Mountain level, likely higher physically (Fought and defeated Eon), Multi-Solar System level with his powers (Moved an entire nebula outside of the universal time and space. Also stated by Kevin Levin that with his powers, Paradox can fix everything that Aggregor caused with a snap of his fingers), Multiverse level with the Chrono Navigator (If desired, the Chrono Navigator can damage space-time to the point that "all of existence", which consists of a multitude of parallel universes that branch out "ad infinitum", would be destroyed)