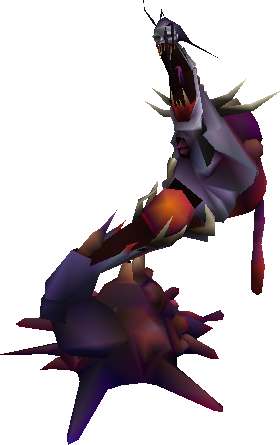 Assistant of Professor Gast Faremis, Hojo deeply resented and envied Gast. Both were involved in the Jenova Project, an initiative to recreate the abilities of the ancient race of the Cetra in the modern day by using the eponymous Jenova lifeform, recently discovered by Shinra. However, when Gast left after discovering Jenova was not a Cetra but an alien, Hojo took over and injected her cells into the embryo of his and his assistant, Lucrecia Crescent's son Sephiroth. When an agent of the Turks special unit from Shinra, Vincent Valentine, confronted him on the inhuman nature of this procedure, Hojo simply shot him and used him for other procedures, which granted Vincent a nearly indestructible body and the ability to transform into monsters, but didn't save him from near death. This led to Lucrecia to insert the Protomateria into Vincent to save his life, but unwillingly made him the vessel for the Chaos Weapon.

The success of Sephiroth's creation allowed Shinra to develop SOLDIER, an entire program of super soldiers based on a simplified version of the process, which quickly armed them to easily rise to power. Hojo, not satisfied realized that Jenova's body wasn't complete and that her parts would gather together, so he began an experiment to see this event take place, something he dubbed the Reunion. When Sephiroth discovered his origins, he lost his mind and slaughtered the town of Nibelheim. Hojo took the survivors and injected them with Jenova Cells to see how would they react to reuniting with Jenova once again. Among those people were SOLDIER First Class Zack Fair and a Shinra infantryman called Cloud Strife.

Powers and Abilities: Genius Intelligence | Superhuman Physical Characteristics; Magic; Time Slowdown (via Slow); Poison Manipulation (via Combo and Bio Gas); Silence Inducement (via Silence and Combo); Power Nullification (via the Silence status); Blindness (via Combo); Sleep Inducement (via Sleepel and Combo); Madness Manipulation (via Confu); Summoning (a variant via Capsule, to call experiment monsters to aid him in battle): Fire Manipulation (via Fire2 with the Poodler Sample) and Blindness (via Evil Poison with the Bad Rap Sample); Possession (created a digital copy of his mind in the Worldwide Network and used it to possess the body of Weiss the Immaculate. However, due to the complicated procedure is not combat applicable); Regeneration (Low-Mid, can regenerate lost limbs); Adaptation (one of Jenova's main abilities is the ability to mimic others lifeforms and adapt to new threats and environments, which extends to a lesser degree to those carrying her cells). Resistance to Poison Manipulation; Silence Inducement; Transmutation; Size Manipulation; Power Nullification; Sleep Inducement; Paralysis Inducement; Petrification; Berserk Inducement; Madness Manipulation; Time Manipulation; Time Stop; Death Manipulation.

Attack Potency: Human level | Solar System level (Could hold his own against a near-endgame party, who had already defeated two fragments of Jenova and would eventually fight Jenova∙SYNTHESIS and Sephiroth shortly afterwards)

Speed: Likely Normal Human | Massively FTL+ (Capable of keeping pace with the party, all whom are much stronger than Bahamut Fury)

Stamina: Likely Below Average to Average (Hojo was already a man in his 40s who never seemed the kind of person to engage in heavy physical activity) | Likely Very High. Jenova Cells grant increased stamina to the host, and with his mutations Hojo didn't relent until he was killed.

Intelligence: Genius. Despite his lack of morals and empathy, Hojo, after the late Professor Gast Faremis, is Shinra's most brilliant scientist, having spearheaded the Project S branch of the Jenova Project after Gast left, resulting in the successful creation of Sephiroth, compared to many other failures from other scientists in the Project G branch. In doing so, he began the line of SOLDIERs that would later help Shinra take over nations across the world. During the events prior and during the game, he successfully deduced the nature of Jenova's regenrative abilities and how Sephiroth would manifest again, long before his reappearance, thanks to his Reunion theory, putting a long and complex experiment into motion that eventually did lead Shinra to both of them. Combat wise, he easily adapted to Weiss' body when he possessed him, using effectively all of his techniques to easily overwhelm Vincent in their first encounter.

Weaknesses: Despite his genius, Hojo is arrogant, condescending and narrow-minded, quick to disregard any possibility or outcome that doesn't convince him or doesn't fit with his theories, which also steems from his constant need to prove his intelligence to others, fitting when Sephiroth described him as a "walking mass of complexes". Once he injected the Jenova Cells in his body, his sanity quickly degraded, and his sociopathic scientific curiosity became a full blown lunacy to answer his own questions with little regard for anything. Additionaly, as seen in Dirge of Cerberus, Hojo can easily get drunk with power when in an advantageous position, aggravating the issues previously described. Before injecting with Jenova Cells, Hojo was just a normal man, vulnerable to any human weakness.

Notable Attacks/Techniques: When he injected Jenova Cells in his body, due to the nature of Jenova and her ability to copy the skills and properties of other living beings, Hojo quickly gained a set of abilities as soon as he mutated. However, given the procedure was rushed and Hojo's body didn't properly interwine with Jenova's genetic material, he didn't gain her psychic abilities and it led to his mind and soul being eroded, as well as horrorific mutations that slowly began to stabilize, but he was killed before they could properly advance. Among his abilities used are the following:

Retrieved from "https://vsbattles.fandom.com/wiki/Professor_Hojo?oldid=5355892"
Community content is available under CC-BY-SA unless otherwise noted.