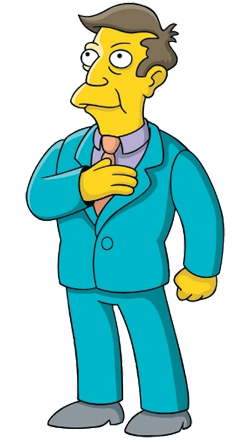 Seymour Skinner, also known as Principal Skinner, is the principal of Springfield Elementary School. He has a passion for education which is consistently challenged by a lack of school funds, incompetent teachers and unenthusiastic students, the most notable being Bart Simpson. He is generally strict on discipline, likely stemming from his time serving in the army, but is otherwise quite nervous and fidgety.

Powers and Abilities: Superhuman Physical Characteristics, Martial Arts and Weapon Mastery (Was a sergeant in the army), Pressure Points (As shown here), Acrobatics

Durability: At least Building level+ (Comparable to Bart, bulldozed through a bridge, and was unfazed, Survived getting caught in an explosion which destroyed a large amount of concrete and vaporized a car. Survived getting strangled by Homer)

Intelligence: Gifted (He has an IQ of 131+, was part of Mensa International, and has knowledge of various subjects such as Science and History. Due to his time in the army, where he achieved the rank of Sergeant, he should be a skilled fighter)

Weaknesses: Skinner is allergic to peanuts.