VS Battles Wiki
Register
Don't have an account?
Sign In
Advertisement
in: Characters, Super Mario Bros, Female Characters,
and 27 more 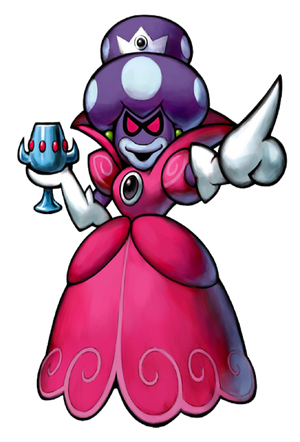 Princess Shroob is the main antagonist from Mario and Luigi: Partners in Time.

She is second in command of the alien race known as the Shroobs (her older sister is the leader). Her goal was to invade and populate the home planet of the Mario Bros due to Shroobs's home-planet being at the brink of death, starting with the Mushroom Kingdom.

Age: Unknown (Younger than her sister)

Attack Potency: Multi-Solar System level (Fought both the past and present Mario and Luigi)

Speed: Massively FTL+ (Kept up with Mario and Luigi)

Intelligence: Very High (was able to lead an army of over thousands of Shroobs to almost successfully take over the Mushroom Kingdom)

Weaknesses: Baby's Tears, can be arrogant and sadistic at times though this usually doesn't hold her back in combat.