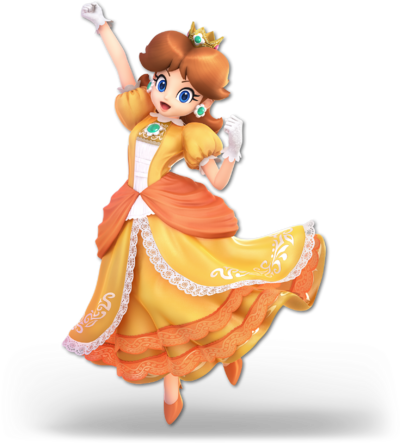 Princess Daisy, or casually Daisy, is the princess of Sarasaland and a supporting character in the Mario series. She is a tomboy, something first stated in her debut appearance, Super Mario Land. In complement to her name, she has an affinity for flowers. Her attire, special abilities, personal emblems, and general representations are often flowers as well. Although Daisy is the ruler of Sarasaland, she currently resides in the Mushroom Kingdom.

After an early hiatus, Daisy was reintroduced in Mario Tennis due to a lack of human characters in the series. She appears most often as a playable character in the spin-off games. She has appeared in over fifty Mario games to date, and has appeared consecutively for more than a decade.

Speed: Massively FTL+ (Can keep up with Bowser's Clown Car)

Stamina: High, can compete in many sports without tiring as well as participate in many mini games.

Intelligence: Gifted. Is the ruler of her own kingdom and has a doctorate. A very skilled player in a variety of sports like her friends.

Weaknesses: Daisy is quick to anger, and she can be overconfident at times.

Note: Like Waluigi, this profile is a composite of every game that Daisy appears in.