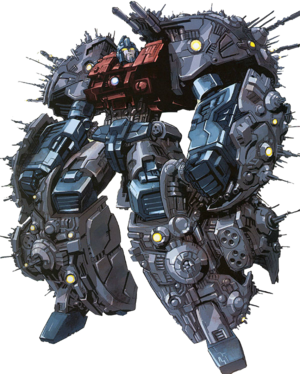 Primus is the deity of light and the brother of Unicron, as Unircon embodies Chaos and Darkness, Primus being his complete opposite embodies Order, Light and all Good in the multiverse.

Early after existence itself was created by The One and he was split from the original Unicron, he realized his brother's evil intentions and attempted to stop him, while capable of fighting him, he realized that he would ultimately lose if he and Unicron kept fighting, he was forced to sacrifice a good portion of his power to ultimately seal Unicron, although he was greatly weakened and became the planet Cybertron in the process. From then on, he serves as the birthplace of the Transformers race via first the Thirteen Primes to continue the fight against Unicron and eventually the warring factions of the Decepticons and Autobots.

Name: Primus, "the Lord of Light"

Gender: None, though manifests as male

Superhuman Physical Characteristics, Immortality (Types 1, 3, 5 and 8), Creation, Large Size (Varies from Type 5 for his weakest versions to Type 9 for his strongest versions), Size Manipulation, Transformation/Shapeshifting (Usually possessing of the ability to shift his shape at will, which gives one of the common names of his creations), Body Control, Technology Manipulation, Soul Manipulation and Information Manipulation (Created the Allspark, possessing of the souls or Sparks of all Transformers, which is also composed of pure information), Empowerment (Empowered by Love, Compassion, Justice, and more such positive emotions), Power Bestowal (Can empower other beings into becoming living representations of his will, such as the Primes; each Transformers has a piece of Primus' essence in them), Dimensional Travel ((Scaling from an extremely weak avatar of Vector Prime, who was able to access the planet of Gigantion through extreme effort, which was locked in another universe), Dimensional Travel (Should be capable of accessing the Transwarp for storage, much like his far inferior spawns), Avatar Creation, Master of Various Weaponry, Regeneration (At least Low-Mid for his weakest versions, Mid-Godly for his strongest avatars; should be comparable to Unicron), Mathematics Manipulation, Matter Manipulation, Empathic Manipulation (Can bring out the positive side of the personality of those he chooses to influence), Morality Manipulation (Can guide other to the side of good), Energy Manipulation, Law Manipulation, Reality Warping, Quantum Manipulation, Telepathy, Sealing, Flight, Spaceflight, Matter Manipulation, Physics Manipulation Cosmic Awareness, Resistance to Conceptual Manipulation, Absorption, Quantum Manipulation, Void Manipulation, Existence Erasure, Reality Warping, Mathematics Manipulation, Mind Manipulation, and Morality Manipulation (Can fight against Unicron for extended periods of time, who possesses all of these abilities, for an uncountable amount of time)

All previous abilities to an unfathomably greater extent, Higher-Dimensional Manipulation, Higher-Dimensional Existence, Large Size (Type 10), Abstract Existence (Type 1; Embodies order and good on a multiversal scale), Conceptual Manipulation (Type 2; Should be comparable to Unicron), Non-Corporeal, Non-Physical Interaction (Can fight against Unicron, who is a Non-Corporeal being), Acausality (Type 5; Exists outside of cause and effect)

Attack Potency: Varies. Planet level for his weakest avatars (Usually depicted as being bigger than Earth) to Multiverse level+ for his strongest (Somewhat comparable to Unicron) | Low Complex Multiverse level (While somewhat inferior, put up a good fight against Unicron and eventually sealed him at a great cost to himself).

Lifting Strength: Varies. From at least Class Y (Via sheer size, being a larger-than-average planet. In one continuity, used the two moons orbiting around him as maces) to Immeasurable | Immeasurable

Standard Equipment: The Matrix of Leadership, The Allspark

Intelligence: Nigh-Omniscient (Comparable to or even more intelligent than Unicron or any other of the Thirteen such as Vector Prime)