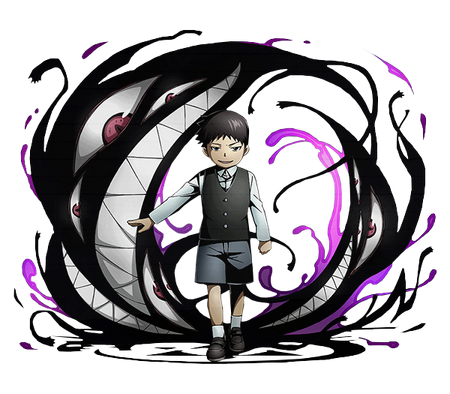 Pride (プライド, Puraido) was the first Homunculus that Father created. He masquerades as Selim Bradley (セリム・ブラッドレイ, Serimu Buraddorei), the adoptive son of King Bradley, and is the final one of the seven Homunculi to be revealed.

Powers and Abilities: Superhuman Physical Characteristics, Shadow Manipulation (Can spread his essence through shadows), Shapeshifting and Body Control (Can shift his true body in different ways to create eyes, mouths, blades and arms), Immortality (Types 1, 3, 6 and 8), Self-Sustenance (Type 2), Enhanced Senses (Can see things around his shadows, gained an enhanced sense of smell from devouring Gluttony), Limited Possession (Can possess others that are linked to Father and thus Hohenheim's bloodline), Soul Manipulation (Absorbed Kimblee's soul when he devoured him), Absorption (Gains some of the abilities and knowledge of those he devours, such as an enhanced sense of smell from Gluttony, the ability to perform alchemy from Solf J. Kimblee, and the knowledge of it from the Gold-Tooth Doctor), Regeneration (Low-High, for his true body only. Should be comparable to the other homunculi such as Lust), Age Manipulation (Can manipulate the age of his container), Likely Matter Manipulation (Gained the ability to use Alchemy from Kimblee and the Gold Tooth Doctor, though his proficiency is unknown)

Attack Potency: Town level (The most powerful and dangerous homunculus, powerful enough to threaten Hohenheim, who was forced to trap him instead of fight him head on)

Speed: Supersonic+ (Kept up with Heinkel and Edward) with Hypersonic attack/combat speed (Greedling could not react to his attacks)

Durability: At least Building level (Took minimal damage from being beaten around for an extended period of time by Heinkel). Town level with shadows (Unfazed by Hohenheim's alchemy)

Range: Standard melee range. Hundreds of meters to tens of kilometers with shadows (While still in Central, was able to devour Briggs Soldiers). Tens of meters with alchemy.

Intelligence: Above average. Was able to deduce that Hawkeye had discovered his identity. Genius level understanding of alchemy with Kimblee and the Gold-Toothed Doctor devoured.

Weaknesses: Pride often underestimates his enemies, needs light for his shadow to work and when he assimilates the abilities of a particular victim, he also gains their corresponding weaknesses. If killed enough times, Pride will run out of souls to regenerate, causing Pride to another form or turn into dust killing him for good. Although, this weakness is somewhat circumvented by Pride being able to absorb souls.

Pride possessing Alphonse.
Add a photo to this gallery