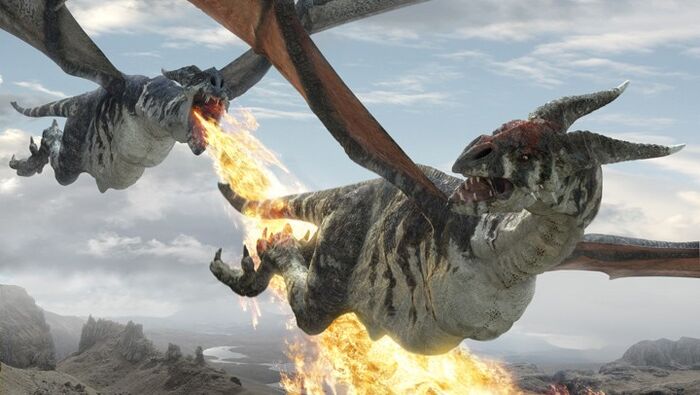 The Prehistoric Dragon was a species of dragon, large flying reptiles, that lived during the Cretaceous Period. It was the land relative of the sea serpent, the Marine Dragon. They are the first species of dragons theorized to exist by paleontologist, Jack Tanner. This was due to finding a complete Tyrannosaurus rex skeleton, with the skull having large talon marks as well as residue from fire. This species of dragon went extinct during the Chicxulub Impact Event.

Origin: The Last Dragon (also known as "Dragons: A Fantasy Made Real" and "Dragon's World")

Powers and Abilities: Superhuman Physical Characteristics, Peak Human Speed on land and Superhuman Speed while flying, Sound Manipulation (Produces a loud piercing cry that can stun opponents), Flight (via Wings and the flight bladder), Enhanced Senses (Their vision, hearing, and smell are superior to that of humans), Fire Breath (By utilizing their stomach gases and stored plutonium, they can produce a direct and concentrated blast of fire), Natural Weaponry (Teeth and claws), Large Size (Type 0; A prehistoric dragon younger than a juvenile was the same size as a Tyrannosaurus rex, and it's parent was much larger than one), Surface Scaling (Have been shown to be skilled in scaling cliff sides to access plutonium), Resistance to Fire Manipulation (Are somewhat resistant to flames, even though they can still be harmed by prolonged exposure)

Attack Potency: Wall level (A young dragon, younger than a juvenile, was able to fight pretty evenly with a T. rex. A fully grown adult was easily able to scar a Tyrannosaurus' skull with its talons and its flame)

Speed: Peak Human on land (Are much faster than adult Tyrannosaurus rex), Superhuman while flying (Can fly multiple miles in relatively short amounts of time)

Striking Strength: Wall Class (Dragons can harm each other, and often fight for territory)

Stamina: Superhuman (Can fly multiple miles during dogfights or while hunting without showing fatigue)

Weaknesses: If they eat too much or run out of gas in their flight bladder, they cannot fly (The first issue, however, is shoveled by the dragons instinctively vomiting up their last meal to lighten themselves). As well as the inability to fly, a lack of gas will keep dragons from breathing fire.