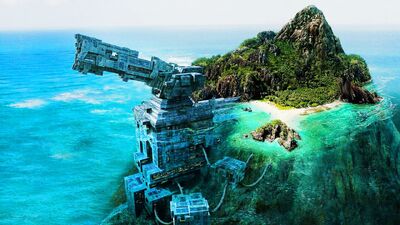 The Precurser Race is a highly advanced space-faring species that arrived on Planet 4546B nearly a thousand years before the events of Subnautica, and are indirectly responsible for setting the plot of the game in motion due to the Aurora being shot down by the The Quarantine Enforcement Platform. While traveling, they came across the seemingly incurable Krar Bacterium, to which they would move from planet to planet looking for a cure, eventually finding it in the eggs of a Sea Emperor Leviathan. However, they were unable to synthesize a cure due to the eggs' long incubation period, so they opted to quarantine the entire planet, with Enforcement Platforms firing down any prospecting spaceships nearby.

Age: At least several thousand years (Strongly implied to have visited the Earth in Mongol and Ancient Chinese Dynasties)

Territory: At least several Solar Systems (Visited both Earth and 4546B, implied to have colonized many more planets in many other Solar Systems after that)

Attack Potency: Wall level (Animals they have engineered, such as Warpers, can easily harm The Survivor) | Small Town level+ to Town level (Much of their technology is powered by one or more Ion Crystals, which contain the equivalent ionic energy of 5 kilotons of TNT). City level+ with the Quarantine Enforcement Platform (capable of firing with the energy equivalent of 100 Megatons) | At least Planet level (Stated that it would easily obliterate an entire planet), possibly Solar System level (Stated that the blast would also take out much of the Solar System along with it)

Industrial Capacity: Extremely High (Can develop new species as the Warpers and nanotechnology in relatively short amounts of time)

Military Prowess: Unknown (Was implied to have a military or armed force, however the size would be unknown)

Weaknesses: May have weaknesses in dealing with sufficiently advanced diseases, as they couldn't find any cure for the Crar Bacteria for nearly a millennia

Retrieved from "https://vsbattles.fandom.com/wiki/Precursor_Race?oldid=6507111"
Community content is available under CC-BY-SA unless otherwise noted.