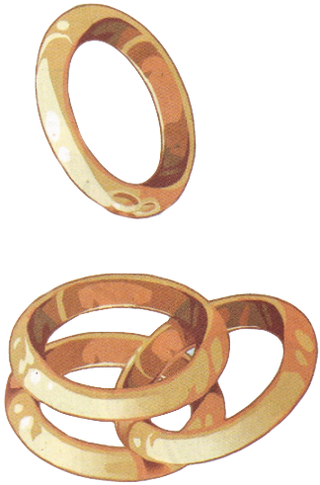 Power Rings, also called Magic Rings, are objects that appear in the Sonic the Hedgehog comic series and its spin-offs published by Archie Comics. They are powerful golden bands which contain a vast amount of energy. Power Rings are natural by-products of Chaos Emeralds, though they do not contain the limitless power the Chaos Emeralds do. Power Rings were artificially created by the brilliant Overlander scientist Nate Morgan as a clean alternative to fossil fuels to protect Mobius' environment.

After his banishment from his home city when his original tests failed, the Mobian Sir Charles Hedgehog aided Nate in mass producing Power Rings to be used by the Kingdom of Acorn. Following this, the city of Mobotropolis entered a new Golden Age as the Power Rings had brought their kingdom out of the medival ages. Since then, Power Rings have been used not only as power supplies for technology, but also as a means to empowering certain individuals, bestowing knowledge and even granting wishes.

Attack Potency: Universe level+ (Can greatly amplify the physical prowess of Sonic and comparable Mobians) | Varies from at least Universe level+ (Prior to the Great Harmony, an abundance of Power Rings empowered the Death Egg to nearly overcome the power of a single Chaos Emerald, which could create Zones while halved and are superior to the Ultimate Annihilator) to Multiverse level+ (Empowered Ugly Naugus to exchange blows with Ultra Sonic and Hyper Tails)

Speed: Immobile, users are boosted from Massively FTL+ to Immeasurable