VS Battles Wiki
Register
Don't have an account?
Sign In
in: Characters, DC Comics, Energy Users,
and 13 more 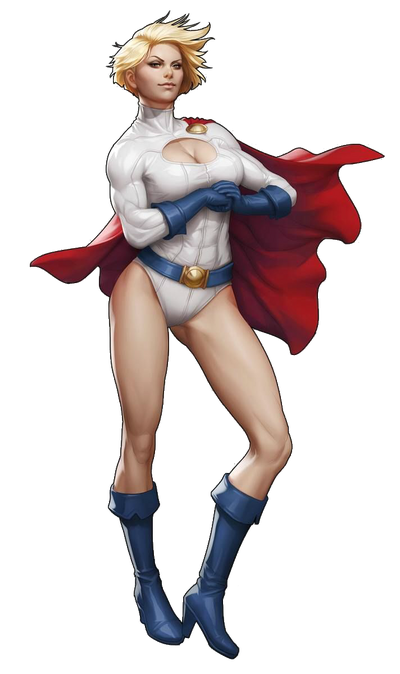 Power Girl is the Earth-Two equivalent of Supergirl, native Kryptonian and cousin to Superman. Her origins have changed several times in continuity when the Multiverse was erased Post-Crisis. The distinctive costume she wears lacks an emblem, and she uses this as an advantage to distract others in combat. She has been a member of the Justice League, the Justice Society, Infinity, Inc., Birds of Prey, the Suicide Squad and the Sovereign Seven. Power Girl was created by Gerry Conway, Ric Estrada, and Wally Wood, first appearing in All-Star Comics #58. (1976)

Attack Potency: Large Planet level, Solar System level at peak (Is a Kryptonian with a similar level of power to Superman)

Punched through a giant magic sword

Pushed a giant ball of space-junk With Martian Manhunter, Superman, and a few other powerhouses

Can clock Wonder Woman, at one point punching her to Canada

Beats up an alternate Universe Superman

Tanked blows from a powerful demon 1 2

Hit hard enough to send her to the moon, mildly annoyed

Withstood several strikes from Wonder Woman without a scratch

Tanked a beating from Superman

No-Selled a punch from Aquaman