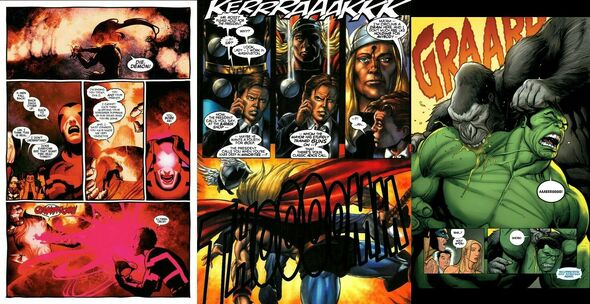 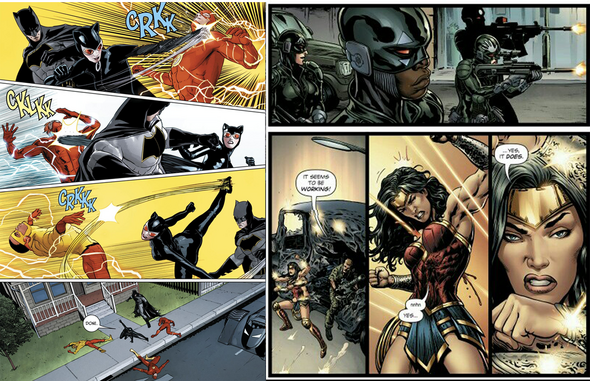 There are several massive problems with using power-scaling for these two prominent franchises that have shared hundreds of different authors over several decades.

Said writers naturally tend to have highly differing opinions and interpretations, which is reflected in their stories. Quite often internal story logic regarding relative power levels is ignored, and personal favouritism (along with plot convenience) decides the outcome of confrontations. While this is done to avoid making outcomes too predictable, the results are completely inconsistent, and most importantly, the enormous contradictions in continuities, power levels, and comparative hierarchies between the many different writers and editors over the decades results in a massive amount of confusion.

A few examples include that the Hulk has been beaten by Captain America, or an ordinary snake, and been severely injured by regular gorillas, or an everyday stop sign, despite that he caused an earthquake across an infinite number of planets, or had his power measured as infinite by the Beyonder, in other stories; Thor being rendered unconscious by an ordinary handgun, but also preventing the destruction of 1/5th of the universe; Black Bolt killing Celestials; Gambit defeating Gladiator; Black Panther placing the Silver Surfer in an inescapable grip; Dormammu beating the Multiversal incarnation of Eternity in one story, only to be manhandled by Cyclops, or Frankenstein's Monster in other stories; or the Beyonders killing the Living Tribunal and all of Marvel's abstract entities, only to be killed in turn by Doctor Doom.

However, this is not the only type of inconsistency. The fundamental natures, sizes, structures, continuities, etc. of many different concepts and objects also tend to vary greatly from story to story. A concept, object or character can be dramatically stronger in a story, and dramatically weaker in other stories.

Just because a certain character displays a certain extreme degree of power in one instance doesn't imply that they will remotely possess the same scale of power in another, and that we can automatically scale another character from the higher end feat. Also, we cannot use the relative power levels for one author in the 1960s and apply it to another present day author, or vice versa. Again, one writer's canonicity cannot automatically be used to power-scale another's.

To illustrate, Marvel's executive editor Tom Brevoort, who is also in charge of writing the official handbooks for the company, and is likely the highest current authority regarding the company's internal continuity and power levels, had this to say regarding the topic:

"I get the sense that, somewhere, there’s a mighty battle boards-style discussion going on about the Sentry. And I try to stay out of those. But I will say that the transitive property has never applied to super heroes. After all, the Fantastic Four and Iron Man and even the Man-Thing have defeated the Molecule Man in the past, and doing so didn’t make them anything more than themselves."

”We need to stop thinking of these power relationships in such simple linear and black and white terms. if real life worked like that, there’d be no need for sporting events of any kind–you could tell which person or team was going to win without a game, from just looking at the stats.”

The former Thor writer Dan Jurgens also stated that in his stories Odin was simply planetary in scale, despite destroying galaxies in previous stories.

And according to Stan Lee, whoever wins in a fight simply depends on whoever the current writer likes best, or wants to win.

Hence, Marvel and DC (the latter company functions in a similar manner, and generally has the same writers at different points in their careers) are primarily interested in entertaining the readers via storytelling, not in accurate power-scaling, which is perfectly fine and acceptable. However, said ideology runs contrary to this site's purpose, of accurately indexing the statistics of characters. We cannot continue to systematically gloss over this fact, as it creates extremely unreliable and misleading ratings.

Just a few of many examples:

That said, we can obviously continue to use power scaling for more internally consistent franchises headed by a single or unified creative voice. The problematic key issue is the staggering amount of different writers and contradictory stories for Marvel and DC characters over their several decades of existence.

Also, to clarify, we deliberately made the above scaling as ridiculously exaggerated as possible, to illustrate that we should not blindly use all powerscaling at face value without consistency and further context, since many people regularly use illogical outliers and extreme writer biases to get whatever statistics that they want, and this is exactly the kind of issue that we should attempt to avoid during our work, in order to gradually improve on the reliability of our profile pages.

Given the long history of Marvel and DC, we are still able to get fairly reliable statistics for quite a lot of characters even without power-scaling between different writers:

1) Feats: The most basic and reliable method for power-scaling would be direct feats. However, the feats should preferably be somewhat consistent, and elseworld and alternative continuity feats are not acceptable for power-scaling.

2) Case-by-case basis: We can still use power-scaling for Marvel and DC, if a certain character is explicitly shown at a certain degree of power within a story, and another character legitimately matches that power.

If a certain author portrays a character at a certain degree of power within a near time period, and has another character match it, power-scaling can also work, but even here it is important to use common sense regarding inconsistencies for story purposes.

3) Official comparisons: If the handbooks officially list certain characters as equal this can be used as a gauge in more logical instances.

4) Consistency: If one character has been depicted to be superior or equal to another consistently, then logically speaking, the stronger or equivalent character can be power-scaled from the weaker or comparable one, if the weaker character has displayed greater practical feats in stories written by the relevant authors in question.

For example, Kryptonians should logically be of similar levels of power to each other.

5) Common sense: Common sense will also be necessary to distinguish between outliers and proper feats. As such, certain power-scaling will be accepted only with community consensus.

7) Properly presenting the full contexts for scans of feats: When attempting to get profile page changes accepted in content revisions threads, always add full issue number references for the stories in which the feats depicted in images occurr, so the members evaluating them can more easily verify the authenticity and canonical reliability of what is truly going on. It is also preferable if you honestly try to explain what is happening in the stories, as it is quite common for people to represent illegitimate feats out of context, including well-intended victims of misinformation (via respect threads or otherwise). Staff members are allowed to lock Marvel and DC Comics threads that do not list any sources for their images, but can be asked via their message walls to unlock them after this problem has been corrected.

Strictly adhere to these rules, as ignoring them purposefully will result in a ban.

Additionally, help in finding errors to be corrected within our Marvel and DC character profiles is greatly appreciated: