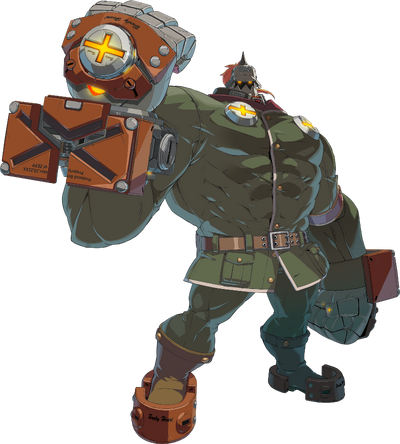 Potemkin (ポチョムキン, Pochomukin) is a character in the Guilty Gear series. He was a former slave in the empire of Zepp, and was a supporter of the democratic revolution that took place. He is currently a member of Zepp's elite presidential guard.

Powers and Abilities: Superhuman Physical Characteristics, Skilled Grappler, Can generate shockwaves, Can shoot fire from his gauntlets, Energy Shields, Non-Physical Interaction (Able to hit souls), Preparation, Transmutation and Attack Reflection (Can turn projectiles to ball of fire and reflect them back)

Intelligence: Above Average. Skilled fighter having been trained by Zepp's finest.

Weaknesses: Is currently forced to wear limiters reducing his power. 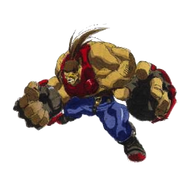 Potemkin in the first Guilty Gear. 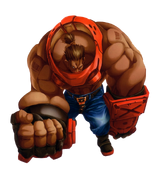 Potemkin in Guilty Gear Xrd Revelator.
Add a photo to this gallery