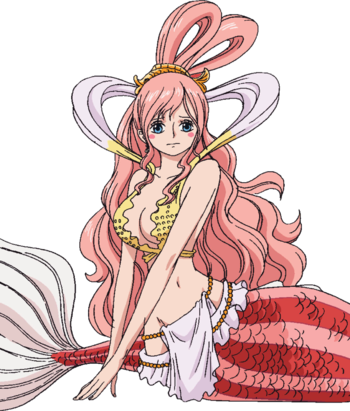 Shirahoshi is the present Mermaid Princess of Fishman Island. She is the daughter of King Neptune and deceased Queen Otohime. As the Current Poseidon, she can communicate with Sea Kings.

Lifting Strength: Unknown, but Superhuman due to her sheer size

Intelligence: Knows how to use her power. Other than that, not a good fighter

Weaknesses: Very emotional (Burst into tears after trying to be brave but failing). She has no skills in combat whatsoever.

Retrieved from "https://vsbattles.fandom.com/wiki/Poseidon_(Shirahoshi)?oldid=5374084"
Community content is available under CC-BY-SA unless otherwise noted.