VS Battles Wiki
Register
Don't have an account?
Sign In
Advertisement
in: Inorganic Beings, Characters, One Piece,
and 27 more 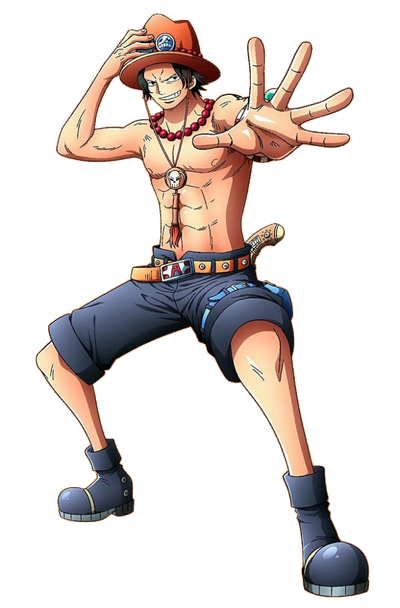 Portgas D. Ace, also known as "Fire Fist" Ace, was the son of the late Gol D. Roger who was secretly adopted by Monkey D. Garp and given the surname of his dying mother Portgas D. Rogue. Placed under the care of Curly Dadan, Ace eventually met his guardian's grandson Monkey D. Luffy and the two became sworn brothers along with Sabo. Ace later left Luffy at the age of 17 to take to piracy, acquiring the power of the Flame-Flame Fruit (Mera Mera no Mi), a Logia that allows him to create, control and transform into fire, and captaincy of the Spade Pirates along with a massive bounty of 550,000,000 berries. Ace later makes an attempt on the life of the pirate Whitebeard and ends up joining the older pirate's crew.

As the series started, Ace was traveling the Grand Line after a former crew member named Marshall D. Teach for murdering a shipmate. After crossing paths with Luffy and his Straw Hat crew, Ace eventually finds Teach and loses against him. Teach then collects the bounty on Ace and he ends up being kept in Level 6 of Impel Down before he was taken to Marineford to be executed. Despite Luffy's rescue attempt, Ace ends up mortally wounded by Admiral Akainu to protect his younger brother.

Powers and Abilities: Superhuman Physical Characteristics, Weapon Mastery (Ace was shown using various weapons, including an axe and a knife. As a child, he used a long bo staff made from pipe to defeat some bandits), Proficient Hand-to-Hand Combatant, Haki (Proficient Busōshoku Haki and Kenbunshoku, Rudimentary Haōshoku Haki user), Reactive Power Level (Is stated capable of growing stronger continuously through battle), Fire Manipulation and Intangibility (Ate the Mera Mera no Mi, a Logia-type Devil Fruit that allows him to become the element of fire and control the flames from his body in various ways), Inorganic Physiology (Type 1. While he's turned into fire), Regeneration (Mid-High, only in his Logia form), Body Control (He should be capable of altering the size and shape of his Logia form to some degree – similarly to Aokiji), Heat Manipulation (Able to change the heat of his fire, so that this can make green, white fire and possibly other colors), Limited Weather Manipulation (Could clear away bad weather like blizzards and make it sunny), Heat Aura (Ace's Haki had been described by Shanks and Benn Beckman to be fiery in nature, to the point that Ace’s very presence was able to stop a blizzard on an island for as long as he was there. As such, when he turned up on Drum Island, no snow fell at all on the island for an entire day), Limited Light Manipulation, Homing Attack and Minor Danmaku (Via Hotarubi), Limited Flight via propulsion, Fire Absorption, High Resistance to Extreme Heat and Fire Manipulation (All Logias are resistant to their respective elements. Resisted the water boiling bath in Impel Down when he had no powers) Resistance to Cold (Unfazed by the cold temperatures of a Blizzard storm while on a high mountain elevation.)

Attack Potency: Country level (Although weaker than Whitebeard, he could consistently leave burns on his body during his earlier days as a pirate, showing that he shouldn't be too inferior from his durability. Circumvented an attack from Aokiji with his own and matched an attack with Akainu before getting defeated by his elemental superiority. Should be somewhat comparable to his peers, Marco and Jozu)

Speed: Relativistic+ (Outran an attack from Akainu targeted for Luffy)

Lifting Strength: At least Class G (Should be superior to Smoker. Was equal to Jinbe in his younger days)

Striking Strength: Country Class (Van Augur stated his basic combat prowess were as excellent as one would expect of a Commander of the Whitebeard Pirates)

Durability: Country level (Took many blows from Blackbeard, who in turn was capable of clashing against Ace’s own attacks. matched an attack with Akainu before getting defeated by his elemental superiority). Logia Intangibility and Regeneration also make him very hard to kill unless circumvented

Stamina: Extremely high, was able to fight against a former member of the Shichibukai (Blackbeard) which should be representative of his all round battle stats, also was able to battle against Jinbe in a five day long fight

Range: Extended melee range with knife, Tens of Kilometers with his power (Caused the Drum Kingdom, which is this large, to stop snowing for an entire day)

Intelligence: Although more intelligent than Luffy, he is not overly smart outside of battle. Expert in hand-to-hand combat (he was able to defeat Luffy in every fight they had before he got his Devil Fruit and after Luffy ate his), his position as leader of Whitebeard's second division fleet shows he has leadership abilities, he is an effective tracker (Shown by hunting down Blackbeard), he is skilled in the use of his Devil Fruit abilities

Weaknesses: Standard Devil Fruit users weaknesses. Often falls asleep while eating, apparently magma can directly harm him as it smothers out his fire (As shown when Akainu nailed him with a magma-enhanced punch) Easily provoked and quick to anger, which led to his death at the hands of Akainu.

Mera Mera no Mi (or Flame Flame Fruit): A Logia type Devil Fruit, this fruit allows the user to transform into fire at will as well as control it. The fruit's major strength like other Logia types allows the user to produce as well become the element they control. In this case, Ace is able to create, control, and become fire. With this in mind, Ace is able to create fire-based attacks. The elemental state the ability endows him with also allows him to avoid conventional attacks as they only disperse him. Turning into fire also has the added effect of burning an opponent depending should the attack be close range and such. Though the user is fire in the elemental state, they are weak against magma, which can consume flames, and can be burned by it despite their dispersion, making it their natural enemy.

Other: Size Calculation of Ace's Entei