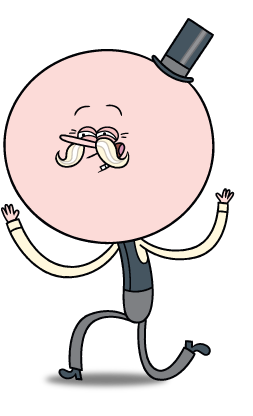 Pops is the naive and lighthearted supporting character of Regular Show, whose father owns the park that Mordecai and Rigby work at.

Unlike his employee Benson, Pops is quite fond of the two and will typically support them in their endeavors. Despite technically being the boss when his father isn't around, Pops' childlike personality makes him a rather poor leader, leaving Benson have to take that role within the park.

It was revealed that Pops is actually a godlike alien who is responsible for the entire universe's existence. Every 14 billion years, he and his brother Anti-Pops have a battle that always ends in the universe being destroyed and recreated.

Due to the timeline reset, Pops had no recollection of any of these events and became vastly weakened, unable to access this strength he used to have.

Pops eventually managed to regain his true power and defeat Anti-Pops once and for all, though not without sacrificing himself. He now resides in the afterlife, looking down upon the cast happy with the wonderful futures they had thanks to him.

Age: Trillions of years (Pops and his brother fight every 14 billion years, and for each time a new tattoo on Earl appears. Earl's entire body was shown to be completely covered with tattoos)

Powers and Abilities: Superhuman Physical Characteristics, Skilled Wrestler, Reality Warping via poetry | Same as before, along with Telekinesis, True Flight, Martial Arts Mastery, Weapon Mastery, Transmutation (Turned a coin into gas), Life Manipulation (Turned a rock into a group of butterflies), Fire Manipulation, Water Manipulation, Weather Manipulation (Created a rainstorm just by saying "rain"), Teleportation, Invisibility, Portal Creation (Made a portal that took him to a timeline he had already destroyed, and encountered his past self), Empathic Manipulation (Was able to grant Anti-Pops, a being of pure evil feelings and morality by hugging him and encompassing Anti-Pops in purple aura), Time Manipulation (Via timeline resetting and traveling to already destroyed timelines), Resistance to Existence Erasing (Can negate Anti-Pops's existence erasing beams and bring back things he had erased) and Plot Manipulation (While he wasn't seen directly resisting Anti-Pops's Plot Manipulation, Pops has stalemated him hundreds of times, neither of them has been able to come up with a way to kill each other for trillions of years and Pops's powers perfectly counter Anti-Pops's)

Attack Potency: Building level+ (Comparable to Mordecai), can negate durability with poetry | Universe level+ (Every 14 billion years he and Anti-Pops would have a battle that destroys and recreates the universe. Reset the timeline during the series finale. Created a blast powerful enough to permanently kill Anti-Pops and himself), can negate durability with transmutation

Speed: Superhuman (Kept up with the polar bear) | Massively FTL+ (At least over 1.5 trillion times FTL. Known as the "Chosen One" and only person in the universe capable of matching his brother and thus should be faster than the Baby Ducks)

Lifting Strength: Superhuman (Can overpower giant wild animals while grappling them) | At least Multi-Stellar (He can grow big enough to where his hands are much larger than stars), likely Galactic (Since Pops is considered the mightiest and most powerful fighter in the universe, his strength should be greater than or at least somewhat comparable to the Baby Ducks')

Durability: Building level+ (Can take blows from those comparable to him) | Universe level+ (Has survived being at the epicenter of an explosion powerful enough to destroy and create universes.)

Stamina: Extreme (Could run for about 16.5 months without tiring. Could spend 2 weeks without sleeping) | Higher than before

Intelligence: Has shown to have knowledge in things such as music, art, combat and other skills. Though he is typically very innocent, naive and childlike. He has also been implied multiple times to be suffering from brain damage | Unknown

Weaknesses: Is very pacifistic and innocent | While much more mature than before, he's still very kindhearted and would rather look for the peaceful way of ending things