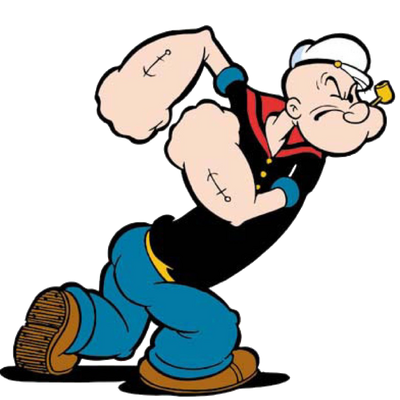 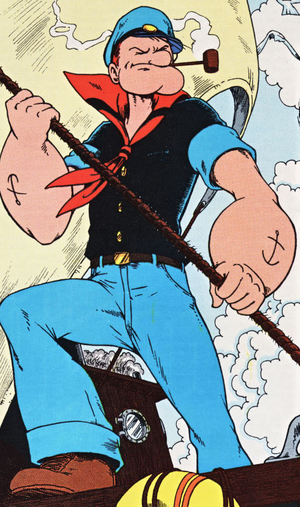 First introduced Dice Island, a story arc in the comic strip Thimble Theater in 1928, Popeye the Sailor Man would later become the main focus of the strip, as well becoming as one of the most iconic comic and cartoon characters of all time. "Borned to the sea" near the bay of Santa Monica, Popeyes' childhood was hard. The ship he was born on was rocked by a massive typhoon just moments after his birth, though his family was ultimately unharmed by the event. Growing up, both his father, "Poopdeck Pappy" and his unnamed mother left his life at a young age. Eventually, Popeye decided to join the military. Despite his rough and gruff appearance, Popeye was a good guy who hated bullies and defended the weak.

Powers and Abilities: Superhuman strength and speed, Invulnerability, Regeneration (Low-Godly), Immortality (Types 2 and 3, can still survive after having his body destroyed and can regenerate by eating spinach), Summoning (Can summon spinach at will), Self-Sustenance (Type 1, can survive in space), Weapon Mastery (Via anchor and his shotgun), Deconstruction (as seen here), Limited Fire Manipulation and Breath Attack (By his pipe), Transmutation (Can punch people/animals hard enough to turn them into other things), Creation (Can materialize a can of spinach out of nowhere), Dimensional Travel (Can exit his cartoon), Flight, Toon Force, Can break the Fourth Wall, Hypnosis (as seen here), Resistance to Mind Manipulation and to being erased, and Lightning Manipulation (A thunder strike didn't bother him at all ), Minor resistance to Freezing (Was still conscious after being frozen solid in a block of ice and could free himself with his pipe), Resistance to Existence Erasure (was unaffected by his entire universe being erased from existence) | All previous abilities, Invisibility and Non-Physical Interaction (He can turn himself invisible and can hit intangible beings), Limited Duplication (Can fight himself in shadow boxing), Fire Manipulation (Can shoot flames from his hands to propel himself around. Is hot enough to melt loads of boulders and rubble into perfect roads), Magnetism Manipulation (here), Clothing Manipulation (here), Matter Manipulation and Fusionism (here), Sound Manipulation via sending a punch through a radio wire, Air Manipulation, Shapeshifting (He can turn himself into a rock, brick and a tire), Magic (Creation, Animal Manipulation, and Explosion Manipulation) (here), Clairvoyance (Can use his own biceps as crystal balls to see things going on further away in the present), BFR (Can make opponents fall out of the animation frames), Attack Reflection, Resistance to Fire Manipulation (Became immune to flames from a dragon), Age Manipulation (an alien device aged him into an old man and he de aged himself back to his prime by eating and than spitting out spinach), Magic based Transmutation, and Size Manipulation (Was once shrunken down before eating spinach by a genie. After getting some, he returned to normal size),

Attack Potency: At least Wall level (As a young man, he hit Brutus so hard he bent metal walls. Defeated an entire buildings worth of armed men, causing walls to blast open. Punched out the Mongolian Monster, without any issue. Killed a shark with his bare hands, uprooted a tree. Sunk a pirate ship, bent a gun with his raw strength), likely higher (Sunk a whaling ship with the "force of a torpedo" and was compared to a tsunami. Easily defeated Ogbert. Stronger than Brutus and Bluto who can harm him) | At least Large Star level (Hit Bluto so hard that he destroyed stellar constellations, although this was done by letting him bounce between different stars, not at once. Lassoed the sun and pulled it up just so morning would come quicker and also blew it out to get private time with Olive Oyl)

Speed: At least Superhuman (Pushed a truck fast enough to where it caused a dust trail), likely higher (While critically injured, he caught bullets. Faster than Brutus who reacted rifle fire during "Double Trouble Down Under") | Relativistic+ (In "Popeye meets Hercules", Popeye turns into a rocket after eating spinach and flies from the moon to earth in about 2-2.4 seconds. The time it takes for light to reach the moon from earth is 1.2 seconds. Also built 8 Navy battleships in 5 seconds)

Striking Strength: At least Wall Class, likely higher (Stronger than Kid Kabbage who punched a tree in half) | At least Large Star Class

Durability: At least Wall level (Tanked 50 rounds of bullets while already heavily injured with no added injuries), likely higher (Survived the explosion of an entire factory's worth of bombs and tanked multiple Scuds at once) | At least Large Star level, Toon Force, Immortality, Regeneration, ability to summon spinach at will, and Resistance to Existence Erasure makes him incredibly hard to kill

Stamina: Very high (Donated a gallon of blood and made a full recovery within a day, could catch bullets while critically injured), far higher with spinach, can continuously replenish his stamina by summoning and eating spinach

Standard Equipment: Cans of spinach and an anchor, a pipe he can use to shoot flames

Intelligence: Average. He is an extremely skilled and experienced sailor from the beginning of the 20th Century, however | Likely high with spinachhas shown to also increase Popeye's skills, as well as his physical capabilities. Popeye has been able to lead a twenty man band, where he was the band himself, to become a master musician, a master sculptor, a brilliant scientist, and a master magician

Weaknesses: Despite his gruff exterior, Popeye is very soft-hearted and doesn't enjoy hurting innocents, claiming he "haz a heart like no onez bizniz". He hates fighting animals and when he does, it's only to beat sense into them. He can be hurt and weakened if he doesn't eat his spinach | His spinach effect has a time limit, otherwise none notable

Tom Cat (Tom and Jerry) Tom Cat's Profile (Both were 9-B, and speed was equalized)

Discord (My Little Pony) Discord's Profile (Popeye was High 4-C, Battle took place in an ocean, Both started 12 feet away)

Retrieved from "https://vsbattles.fandom.com/wiki/Popeye?oldid=7106777"
Community content is available under CC-BY-SA unless otherwise noted.