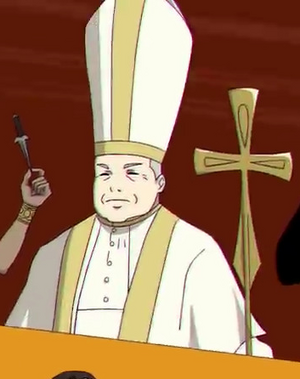 Pope Pius is one of the main antagonists of the Super Science Friends webseries, featured in episode 5. In an effort to renew faith and get more attendees to his church, he sets up a scheme to travel into the past and re-enact the events of Noah's Arc and The Flood, capturing animals and placing them into an Arc while taking pictures.

However, he is stopped by the Science Friends, who, with the help of Chruchill's artillery, kill him and somehow manage to kill God.

Attack Potency: Large Building level (Summoned massive lighting bolts from the sky and often clashes with Darwin. Can summon God or his arms to attack enemies. Should be superior to his subordinates, some of which could harm the Science Friends), Multi-Continent level through Environmental Destruction (Caused storms that covered the earth and flooded the planet within seconds)

Speed: Subsonic (Reacted to attacks from Darwin and the other Science Friends), Massively Hypersonic+ attack speed with lightning (Capable of generating cloud-to-ground lightning)

Lifting Strength: Regular Human physically, at least Class K with powers (Should be comparable to Darwin, who could drag out the HMS Beagle)

Durability: Large Building level (Unaffected by a blast of his own lightning he had summoned)

Stamina: Above Average. Wasn't tired with extensive use of his powers, even when summoning a flood and raising worldwide sea-levels. Although, an apple thrown by Einstein instantly crippled him

Range: Hundreds of meters with lightning and attacks from God, millions of kilometers with weather manipulation

Weaknesses: If God is killed, he should lose his abilities. Presumably doesn't have access to much of his powers in the present day

Retrieved from "https://vsbattles.fandom.com/wiki/Pope_Pius?oldid=4121857"
Community content is available under CC-BY-SA unless otherwise noted.