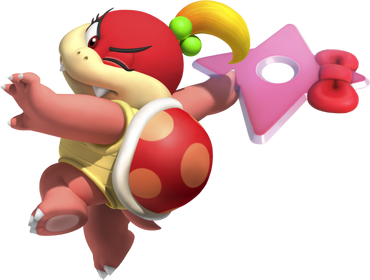 Pom Pom is Boom Boom's partner and a loyal servant to Bowser. She made her debut in Super Mario 3D Land and is a recurring opponent for Mario and his friends.

Powers and Abilities: Superhuman Physical Characteristics, Acrobatics, Weapon Mastery, Flight, Teleportation, Duplication, Limited Danmaku (Can make all her duplicates throw shurikens at the same time), Can spin in her shell

Speed: Massively FTL+ (Can keep up with the Mario Bros.)

Retrieved from "https://vsbattles.fandom.com/wiki/Pom_Pom?oldid=6288521"
Community content is available under CC-BY-SA unless otherwise noted.