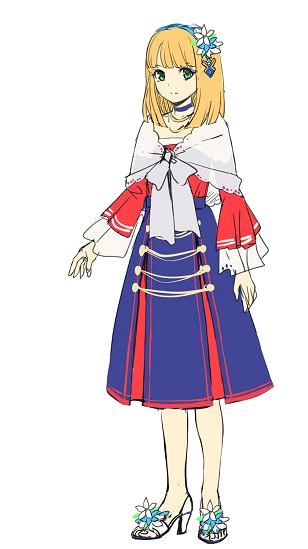 Pollux is is one of The Twelve Heavenly Stars. She is one of the Gemini Twins along with her brother Castor. She is simultaneously the strongest and weakest of the Twelve Heavenly Stars. She is the leader of the fairies and spirits, who are the opposite of the demons. As the counterpart of the Demon King, she maintains the balance between good and evil as well as light and darkness in the world. She is the avatar of the Wood Ouroboros and has played the role in Alovenas script of being the light that balances Orm's darkness in the world.

Tier: Unknown, Low 5-B with Argonautai

Classification: The Fairy Princess, Avatar of the Wood Ouroboros

Attack Potency: Unknown (Despite being Level 800, in exchange for her powerful Argonauutai skill, Pollux has little combat power. She is inferior even to adventurers), Small Planet level with Argonautai (Comparable to Ruphas Mafahl)

Stamina: Limitless (Pollux can draw an unlimited amount of arcane power and divine power from the world of Midgard itself via her dormant true form which allows her to infinitely resurrect the heroes summoned by her Argonautai skill)

Argonaut
Add a photo to this gallery

Retrieved from "https://vsbattles.fandom.com/wiki/Pollux_of_the_Twins?oldid=5948674"
Community content is available under CC-BY-SA unless otherwise noted.