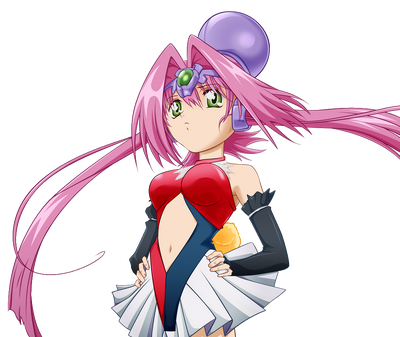 Poemi Watanabe is the main character of the Excel Saga spin off Puni Puni Poemy. She is a 10 year old girl who dreams of being a famous voice actress.

Even at the beginning of the story, she shows powerful toon-force like abilities, but after an alien kills her parents, she finds a magical fish that turns into a wand she uses to become a Magical Girl and the Living Will of The Earth Itself.

She usually refers to herself as "Kobayashi", the name of her real life voice actor.

Classification: Magical Girl, Devil, Living Embodiment of The Will of The Earth, Former Human

Attack Potency: At least Planet level (Effortlessly destroyed a robot stated to be capable of blowing up earth)

Speed: Unknown (Could move so fast she cut straight through a dog)

Durability: At least Planet level (Survived attacks from a robot that could have blown up Earth)

Range: Melee physically, planetary with reality warping (Could affect the earth even when moderately far away into space)

Standard Equipment: A gutted fish she uses as her magic wand (She doesn't need it to use her powers after her transformation)

Fiamma of the Right (To Aru Majutsu No Index) Fiamma's Profile (Speed was equalized, both were 5-B)