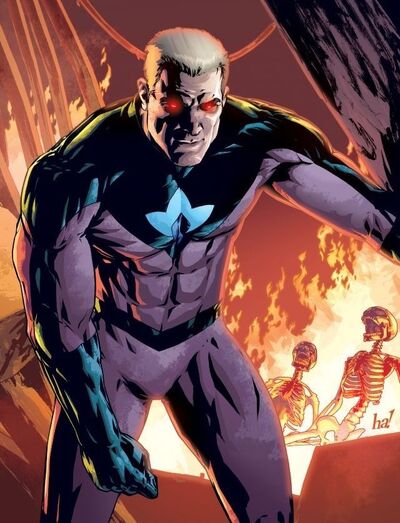 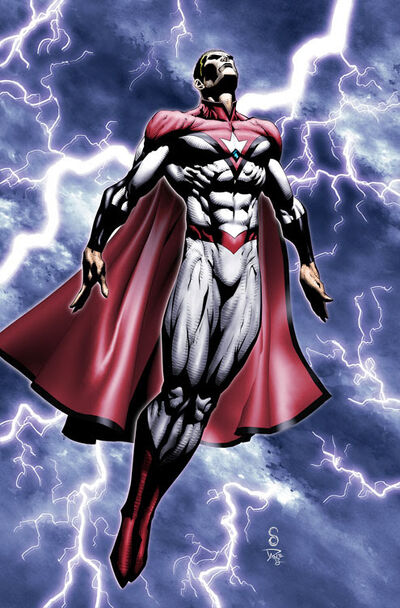 Once Earth's greatest hero, the Plutonian was an all-powerful champion, battling evil in all its forms alongside his superheroic allies in the Paradigm. Unbeknownst to the world however, or even his closest friends and allies, Plutonian's mind was slowly fracturing. A childhood of abandonment; a need to be loved undermined by his super-senses bombarding him with pleas for help, whispers of fear and mutterings of ingratitude; the constant strain of holding his titanic powers in check from shattering the world around him; betrayals by those he loved; all these and more served to tear him apart within and poison the hope in his soul to bitterness and resentment. Finally snapping when it was exposed that he had inadvertently caused a disaster claiming hundreds of lives, and covered it up knowing that with this failure he would never be loved again, he burned his home of Sky City to the ground and commenced a campaign of planetwide murder and wanton cruelty. Gleefully slaughtering millions as his rage and indignation were set free at last, only a handful of his former allies and enemies remain alive and on the run to try and find how to save the world now that its savior has betrayed it.

Powers and Abilities: Reality Warping (See note), Superhuman Physical Characteristics, Flight, Gravity Manipulation, Energy Projection, Heat Manipulation (Capable of transferring kinetic energy to the air to simulate heat vision, while he can also draw the motion out of a medium for freeze breath), Air Manipulation, Enhanced Senses (Can hear whispers and heartbeats from across the world, alter the atomic structure of objects he views to simulate X-Ray vision, perceive electromagnetic radiation imperceptible to humans, anticipate attacks before they happen, see individual electrons in a brain, and detect the exact position and momentum of every atom around him), Eidetic Memory, Telepathy, Quantum Manipulation, Probability Manipulation (Able to manipulate quantum mechanics with his mind. Theoretically capable of reversing entropy, altering probability, and seeing through time), Telekinesis, Density Manipulation, Statistics Amplification, Statistics Reduction (Subconsciously alters the density of matter, resulting in his extreme durability while also lowering the density of his opponents in order to smash through them more easily. This is also responsible for his flight), Intangibility, Time Manipulation (Took control of the simulated timeline of his own life from the Eleos), Mind Manipulation, Physics Manipulation (Able to sidestep the laws of physics due to his power), Resistance Negation (Capable of using a mind as a lens to see through time, bypassing standard resistances to mental incursions), Resistance to Poison Manipulation (As a baby, was unaffected by rat poison and carbon monoxide poisoning), Radiation Manipulation (States that he bathes in radiation all the time, was fine being dropped inside a star), Mind Manipulation (The Eleos weren't able to look into his mind any more than they could look into the minds of one another)

Attack Potency: Varies from Small Planet level (Even while unaware and in a dreamlike state, effortlessly overpowered forces strong enough to liquefy someone capable of splitting a planet) to Large Star level (Once aware of his reality warping nature, Modeus (Irredeemable) needed to constantly drain the energy of stars to harm him, with their fight destroying distant star systems with every blow exchanged). Possibly far higher with enough experience (Modeus and Qubit imply that with enough time he could affect the entire universe with his powers, while his parents imply that he's very rapidly approaching their level during their brief conflict)

Speed: Massively FTL+ (He outraced a picosecond radio signal from its origin point to a satellite in orbit in less than 1/3 of a second, flew from a distant solar system to another in less than an hour)

Lifting Strength: Multi-Stellar (Unaffected by the weight of a star system being forced on to him, withstands the pressure of a star, and can drag around an object with a mass likened to that of a small black hole)

Durability: Varies from Small Planet level (Completely unaffected by forces strong enough to liquefy a planet splitting alien) to Large Star level (Endured many blows from Modeus, with each one draining all the energy of a distant star and with this sort of energy being necessary to even harm him). Possibly far higher with enough experience.

Intelligence: Extraordinary Genius, able to read and memorize the contents of a library in one day as a child. Able to interpret emotions and desires just by viewing the electrons moving about a human brain while also smelling pheromones emitted. When informed about his true nature, very rapidly began developing his ability, unlocking more and more applications. While some have called him unskilled in standard combat, the viewpoints of others contradict this, and throughout the series he has demonstrated extreme precision with his actions such as when he was able to throw large rods from space and avoid killing anyone by a deliberate margin of error only millimeters wide.

Weaknesses: Mentally unstable, difficulty not causing damage with his powers unless constantly concentrating, invulnerability can be bypassed by teleporting away individual pieces of him, can be contained by material cloned from his own skin, the Candle of the Nahru Visna takes away his powers as long as it burns, initially unaware that his powers are mental in nature and therefore unable to utilize their full potential.