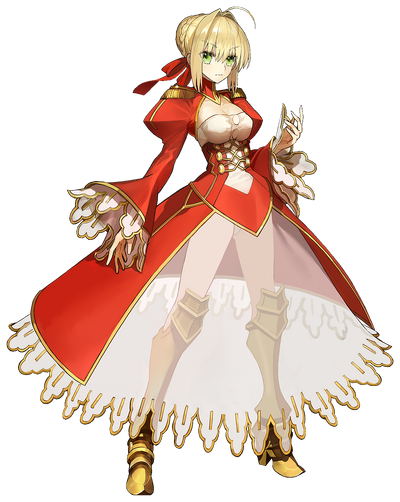 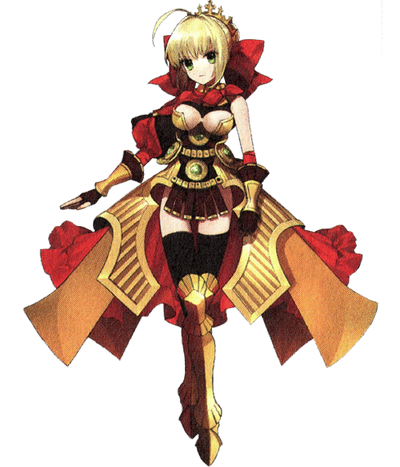 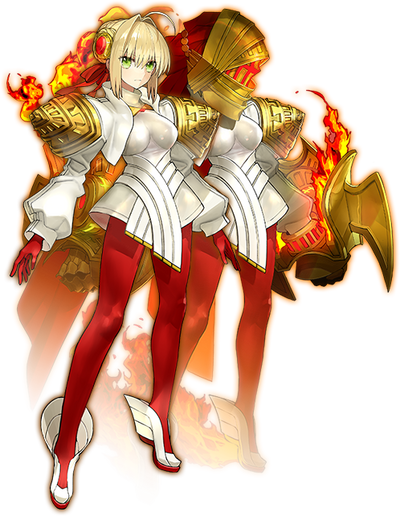 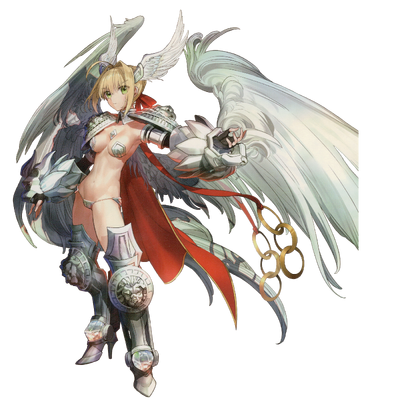 Saber is the Saber-class Servant of Hakuno Kishinami during the Moon Cell Holy Grail War.

Her true name is Nero Claudius Caesar Augustus Germanicus, the Fifth Roman Emperor, who is remembered as a tyrant who oppressed Christians under her reign and was thus regarded in the same light as the Devil.

In truth, while she was a hedonist and was prone to flights of egomania and grandeur, she loved her people and Rome, and reigned best she could. She was loved by the people despite her quirks, and she established diplomatic relations with many other nations, including Britain, laying the foundation for the existence of the legend of King Arthur. However, she was plagued by her mother and the senate, and was forced to cut her mother down in public. She lost many relatives and friends, and her remaining family grew to see her as a monster even as the masses loved her more and more.

Age: 17 years old when she became Emperor, 30 years old at the time of her death

Attack Potency: Island level (Should be at least comparable to Archer, can fight and defeat Gawain), higher with Laus Saint Claudius, Fax Caelestis, and within Aestus Domus Aurea (A B-rank and B+ rank Noble Phantasm, respectively, which are superior to C-rank Noble Phantasms, which are the equivalent of A-rank attacks. Should be comparable to her Bride counterpart, who was able to stall for time against Cú Chulainn Alter. Battled and defeated Romulus during the Septem Singularity) | Multiverse level+ (Defeated Kiara Sessyoin and stronger than BB) | Multiverse level+ (Capable of barely damaging Sefar, draws power from the Mooncell) | Multiverse level+ (Stronger than before, comparable to Sefar, and destroyed the Velber Ark's defenses with Charitas Domus Aurora, which not even the Mooncell could damage).

Standard Equipment: Her sword, Aestus Estus, the Original Flame, and the Regalia. As Saber Venus, she wields Photon Ray.

Intelligence: Saber, true to her class, is an accomplished swordswoman despite her ditziness and lack of fame as one during life, being able to clash with foes as skilled as Gawain, one of King Arthur's finest knights and a fellow Saber. She has many skills beyond this, being an accomplished polymath with a self-proclaimed great ability when it comes to the fine arts, and is an incredibly meticulous perfectionist. Her efforts to perfect Rome have been referred to as "exhausting the bounds of human intellect". She is grandiose and flamboyant, but strangely perceptive when she needs to be, taking note of her Master's flaws but accepting them for who they are. She is also well aware of her limits and is able to judge most Servants with a glance, advising her Master to retreat when necessary.

Weaknesses: Saber is prone to migraines and the skills she gains via Imperial Privilege are usually not permanent as a result. Summoning and maintaining Aestus Domus Aurea is taxing for her, so she can only keep it active for a limited amount of time. She is somewhat flamboyant and prideful, but keeps her ego in check when fighting seriously.

Aestus Domus Aurea: Golden Theater of the Flamboyant: Nero Claudius Caesar's Noble Phantasm, representing the explosion of her artistic talent and passions in life in the form of the theater she designed and constructed herself. It is manifested through her magical energy in a manner similar to a Reality Marble, but she builds it on top of the World as opposed to overwriting it, allowing her to maintain it for longer. It is not the embodiment of her inner world either, but a High-Thaumaturgy that she and she alone can perform, driven by her aspirations and ego.

Within the Golden Theater, everything is made advantageous for Nero, boosting her parameters by one rank (effectively multiplying them by a factor of ten), gradually weakening her opponents, and allowing her to completely ignore their defenses. In addition, due to a legend in which she blocked all the doorways when her audience attempted to leave her in her first performance, leaving Aestus Domus Aurea is virtually impossible without Nero's permission or its destruction.

While within Aestus Domus Aura, Nero gains access to several unique skills that can only be used in its confines.

Charitas Domus Aurora: Auroral Theater of Delirium: Nero's Noble Phantasm as Saber Venus, an Anti-World Noble Phantasm that she uses to destroy the Velber Ark's multidimensional defenses. First using Aestus Domus Aurea to entrap her opponent, Nero summons an array of magical circles with Photon Ray, firing a pillar of light from them that completely engulfs and destroys her target.

Magic Resistance: An innate ability that grants protection against magical effects. Unlike the Resistance effect that merely rejects Magical Energy, this ability cancels the spells altogether. Nero's Magic Resistance is quite low for a Saber, as she never dealt with it in life, thus its rank of C cancels spells with a chant below two verses. It cannot, however, defend against High-Thaumaturgy or Greater Rituals.

Riding: The ability to ride mounts. At B-rank, it allows Nero to handle most vehicles and animals with great skill, even vehicles that did not exist in her lifetime, such as jet planes. However, she cannot ride Phantasmal Species, such as Monstrous Beasts. In addition, though her forte is chariots, she avoids them.

Imperial Privilege: An ability that allows Nero to gain skills that would normally be impossible for her to possess for a short amount of time. At EX-rank, she can even modify her body to gain traits such as Divinity. Nero uses Imperial Privilege to give herself the swordsmanship abilities of a Saber, resulting in her class, and can use it to gain more such as riding, artistry, unnatural charisma, tactical knowledge, etc. However, she cannot acquire skills without basis - but since she's a polymath, she can gain virtually any ability she desires, such as the ability to pilot a jet plane. Due to her poor attention span and constant migraines, most of the skills she gains are temporary, as she eventually forgets them. The skills she always have active are:

Migraine: Due to her hysterical nature and repeated poisoning by her mother throughout her life, Nero suffers from chronic headaches, preventing her from showing the full extent of her artistic skill. It does have beneficial effects, however, as it makes attempts of mental interference less successful.

Thrice-Setting Sun: A skill that Nero can use to resurrect herself up to three times per activation if she falls in battle, though it must be activated beforehand to take effect. It is born from Nero's final anecdote when a Roman soldier found her three days after her suicide and covered her remains. In that moment, she opened her eyes and thanked the soldier before slipping away once more for good. 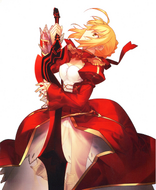 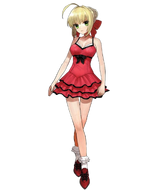 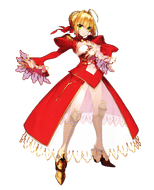 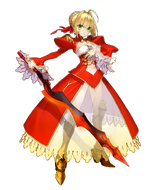 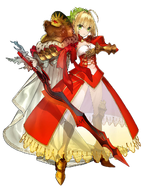 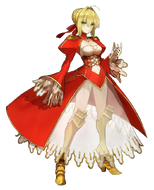 Nero in Fate/Extella
Add a photo to this gallery