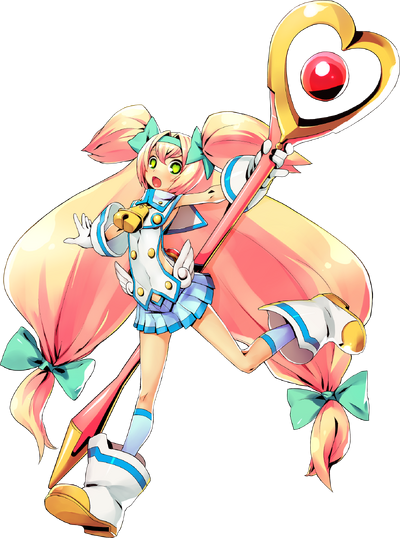 Platinum the Trinity is a girl with two (technically three) souls named Luna and Sena. She became a playable character starting as a DLC for BlazBlue: Continuum Shift.

Platinum has three split personalities: The first is Luna, a rude girl with a stubborn attitude that hates Ragna, but admires Jūbei. The second is Sena, a polite, understanding, and sometimes curious boy who tries to calm Luna down whenever she encounters Ragna. And lastly, Trinity Glassfille, one of the Six Heroes, but she barely has time to control Platinum’s body, which is almost similar to her own body.

Superhuman Physical Characteristics, Self-Sustenance (Type 1; Can withstand the Edge, which has no oxygen), Weapon Mastery, Alchemy, Magic and Ars Magus User, Acausality (Type 1; Is unaffected by the effects from a Phenomena Intervention, which can reset an entire timeline), Limited Glyph Creation (Can create glyphs when unleashing his power), BFR (Send bell to time between time), Non-Corporeal (Her true form lacks a physical body), Non-Physical Interaction (Can his Arakune and Izanami), Invulnerability (Is immune to conventional weapons due to existing outside of Logic), Psychometry (Alchemists are capable of gathering information on their surroundings as shown in Xblaze), Flight, Healing (Can heal wounds), Statistics Amplification (Amplified Mai to the point that she can easily bypass Meifang's defense), Summoning (Summoned Muchorin out of the blue), Information Analysis (Can analyze the info of objects with a mere glance), Soul Manipulation, Healing and Regeneration Negation (up to High-Godly; Nox Nyctores can damage the soul, negating any form of recovery, even when the reality is warped by multiversal entity, Nox Nyctores are also superior to Ars Magus, a weapon capable of killing the Black Beast, a creature that has the ability of Self Observation, which is what Terumi used to regenerate from Hakumen's Time Killer), Automatic Reactions and Movements (Nox Nyctores fights, moves and warns the user on their own without any consent), Possession (Capable of possessing a Nox Nyctores), Matter Manipulation (Muchorin is capable of incarnating matter), Mind Manipulation (Tried to take over Terumi's mind and materialized things inside his mind), Reality Warping (Capable of materializing and warping reality within Terumi's mind), Pocket Reality Manipulation (Created a pocket dimension for Terumi), Spatial Manipulation (Can make a barrier can segregate an area from the outside world), Sealing (Capable of sealing souls), Pain Manipulation (Inflicted Pain on Hazama despite him being unable to feel pain), Power Nullification (Can cancel the fusion process of Jin with the Susanoo Unit), Multiple Personalities (Due to her multiple spirits inside her), Energy Projection (via her Astral Heat), Earth Manipulation (Can cause earthquakes with her hammer), Time Stop, Precognition (Predicted a danger minutes before it happened in Variable Hearts), Life Manipulation and Teleportation (Can create life and teleport with alchemy), Sleep Manipulation (Comparable alchemist to Cipher who can put people to sleep by a mere touch), Clairvoyance (Was able to predict Terumi's location in Continuum Shift), Creation, Transmutation, Biological Manipulation, Power Bestowal, Forcefield Creation, Telekinesis, Information Manipulation, Air Manipulation, Phenomena Intervention (Type 1; Rachel stated that Lunasena is a mutual observation unit, confirming that they are Observers) Limited Nonexistent Physiology (Type 1; Is able to keep herself conscious and fight even if she's erased from existence, though this doesn't last long), Inorganic Physiology (Type 1) and Weapon Creation

Resistant to the following: Empathic Manipulation (The Nox Nyctores can shut down the user's emotions), Paralysis Inducement (Could fight Hakumen without getting paralyzed), Transmutation (As a chosen, she's unaffected by the Embryo's effect to turn everything into seithr), Corrosion Inducement (Resists getting corroded by the Cauldron), Poison Manipulation, Madness Manipulation, Biological Manipulation and Statistics Reduction (Everybody can resist Seithr to some extent which is poisonous, can induce addiction and deteriorate bodies as well as reducing the power of others), Deconstruction (Is capable of being near a Black Beast without deconstructing as it's stated to do in Phase Shift), Mind Manipulation (Able to resist the boundary/cauldron, which when entered or get closed, will result in taking infinite information, dating across beginning of time and all possibilities), Body Puppetry (Unaffected by body puppetry effects of Nox Nyctores), Information Analysis (Undetected by Tager's scanner), Perception Manipulation (Resist the effects of Ars Magus, which nullifies senses of the user), Petrification and Gravity Manipulation (As someone with as much experience in magic as Nine, she should be able to replicate an Ars Magus barrier, which is stated to protect the user from these effects), Law Manipulation, Water Manipulation, Earth Manipulation, Fire Manipulation, Air Manipulation, Darkness Manipulation and Light Manipulation (Exists outside of Logic, the fundamental rules of the world, which includes the 4 elements and two great origins), Heat Manipulation (Is unfazed by the intense heat from a cauldron), Soul Manipulation, Healing and Regeneration Negation (up to High-Godly) and Fear Manipulation (Is capable of fighting against Ragna numerous times with the Azure, which can inflict soul damage beyond the help of a multiversal entity, and negate any form of Recovery is also unfazed by his passive fear hax later onto the story, can also shrug off blows from the Azure, which is superior in terms of regeneration negating capabilities than a Nox Nyctores, which are superior to Ars Magus, weapons that are capable of killing the Black Beast, a creature that has the ability of Self-Observation, which is what Terumi used to regenerate from Hakumen's Time Killer), Radiation Manipulation (Magic is stated to being able to cancel out the effects of radioactive substances in Phase Shift), Void Manipulation and Corruption (Type 3) (Can resist the effects of the boundary, which can erase those that enters it and corrupt them beyond recovery in a similar fashion to what happened to Arakune), Absorption (Can fight the Black Beast without being absorbed), Power Nullification (Is able to use her powers despite Kushinada's Lynchpin being activated), Precognition (Was unpredictable to Terumi), Phenomena Intervention (Unaffected by phenomena intervention even by Amaterasu with Celica's blessings) and Chaos Manipulation (Resists the boundary, which turns everything into a spiraling chaos)

All previous abilities except for Multiple Personalities. Non-Corporeal and Resistance to Void Manipulation, Enhanced Senses (Can navigate through the boundary, an infinite space of nothing), plus Power Nullification, Fire Manipulation, Poison Manipulation, Explosion Manipulation and Status Effect Inducement (Was in possession of Rettenjo)

Stamina: Very High, potentially Limitless due to being an Embryo Storage.

Intelligence: As Luna/Sena, she has an intelligence of a kid. As Trinity however, she is genius. Has mastery over Ars Magus, Magic and Alchemy at the same time, her intelligence rivals Nine's.

Weaknesses: Staying in an unstable place will eventually erase Trinity from existence, as she herself is unstable being, though it's a non factor when Trinity is with them and when Jin brought their existance back. As Trinity, she is friendly to everyone, which makes her easy to manipulate, as what is seen with Kazuma in Phase Shift 4, however she loses this weakness by the end of Chronophantasma 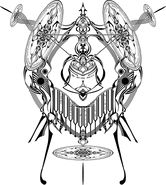 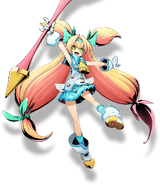 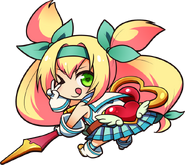 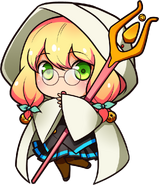 Trinity inside Platinum
Add a photo to this gallery

Start a Discussion Discussions about Platinum the Trinity