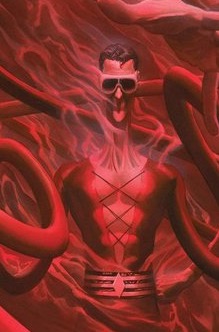 Eel O'Brien was small time gangster who was in the middle of a heist with his friends. As he was unlocking the safe, a guard caught wind of their crime and tried to stop him. One of his friends shot the guard and the guard shot back, but missed and hit the container of a chemical gas that spread towards Eel. It burned his skin, severely injuring him. While escaping in car, his friends betrayed him and chucked him out of the car, leaving him to die, however the gas didn't kill him and instead gave him the powers of elasticity, turning him into Plastic Man.

Attack Potency: At least Building level+ (Can effectively fight off Man-Bat, who is superior to Batman)

Lifting Strength: Superhuman (Can restrain giant rock monsters, and easily lift a man above the clouds)

Durability: At least Building level+ (Is bulletproof. Can take hits from Man-Bat)

Stamina: Unknown, likely high (Took multiple beatdowns from a bat successively, and shrugged them off)

Range: Unknown, at least kilometers (Eel himself doesn't know the extent of his stretching abilities, but he can lift a man into the stratosphere, and can extend himself to massive distances)

Intelligence: Average (Is a skilled lockpick)

Weaknesses: Formerly would've exploded if he went a mile away from his teammates at the Teriffics. Currently none notable.

Retrieved from "https://vsbattles.fandom.com/wiki/Plastic_Man_(Post-Flashpoint)?oldid=5399347"
Community content is available under CC-BY-SA unless otherwise noted.