Planet of the Apes is a science fiction media franchise that originated from a 1963 french novel by Pierre Boulle but was brought into popularity and given a pop culture status as a movie in 1968. What followed was various sequels and prequels (which then spawned two TV series), a remake in 2001, various comics and video games across the decades, and most recently, a reboot trilogy starting in 2011 and ending in 2017.

Varies from Street level or less (for the humans and weaker apes such as the chimpanzees and bonobos) to Wall level with the stronger apes (mostly gorillas and, occasionally, orangutans). Technologically mostly remains unchanged from the modern world, as even in the future of 3978 from the first Planet of the Apes movie, apes still use weapons comparable to those of today, with the exception of a single doomsday device (a "Divine Bomb") capable of destroying the Earth, doing so in Beneath the Planet of the Apes. In that same movie, we are presented with humans that have hidden themselves underground from the apes and have developed supernatural abilities such as creating illusions and mind control as well as telepathy over many centuries of evolution after descending from a long line of nuclear holocaust survivors.

General Ursus
Add a photo to this gallery

General Thade
Add a photo to this gallery 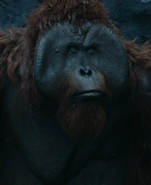 Luca
Add a photo to this gallery
Retrieved from "https://vsbattles.fandom.com/wiki/Planet_of_the_Apes?oldid=5511026"
Community content is available under CC-BY-SA unless otherwise noted.