For many feats of very high destructive power scaling from measuring sticks like humans, trees or even mountains becomes very difficult, because they are too small compared to the phenomenon we are scaling. For such feats scaling from the size of the planet itself can be of interest. However, due to multiple factors, this is not as easy as scaling from other objects.

Requirements for Performing the Scaling

Not every view of the apparent horizon should be used for planet curvature scaling. Aside from the curvature of the planet itself how far one can see is also constrained by how much fog, air pollution and similar limit the maximum viewing distance. Even just barely noticeable unevenness in the land could influence the result to a high degree if the point of view is too close to the ground.

As such one should usually not use planet curvature scaling unless the point of view is from high above the planet. It should be in space, outside of the earth's atmosphere.

Often it is self-evident whether a point of view fulfils this requirement. If that is not the case angsizing can be used on the final result of the scaling to confirm the distance of the point of view to the planet.

Two further requirements are that a reasonable guess at the diameter of the planet needs to be possible and that the planet's curvature is visible in the first place.

How to Perform the Scaling 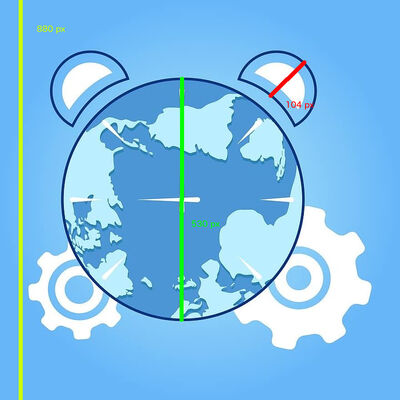 Should the planet not be fully visible in the panel, the circle that is its horizon can first be completed before measuring its diameter.

Since planets are approximate spheres we can not assume that the length of the green line is equal to the actual diameter of the planet. That is because we never see half of the planet, but only ever a smaller part of the front of the sphere. In order to figure out the real length of the green line, the corrected planet diameter as we will call it, we need to set the values we found into the following formula:

If typing this formula into a calculator pay heed that the tangent is calculated in degrees, not radians.

For the values in our previous example that would be:

From that, we can figure out the size of our object, in the case of our example the red line that measures the ear, via the usual pixel scaling methods:

The above scaling method can only be used if the object being scaled is close to or behind the horizon. Since objects closer to the point of view appear larger than objects further away, scaling without correction for that would inflate the size of the scaled object.

Hence further mathematical consideration is necessary for performing such calculations. The details depend on the object that is supposed to be scaled.