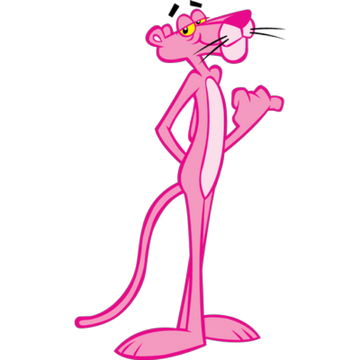 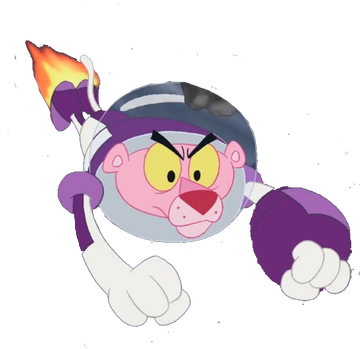 The Pink Panther is a mischievous character who often gets in trouble with others, whether by his own fault or others. Typically he handles any trouble with a relaxed, nonchalant attitude, and he often manipulates the entire situation itself.

Age: Unknown but has shown to exist as far back as prehistoric times

Attack Potency: Dwarf Star level (Can damage Big Nose who survived an explosion that sent him to the moon, survived an ice explosion seen from space, and had the planet grow from pebble size to normal right in front of his face and survived mostly uninjured), higher with Vitamin Pink (Powers up all stats), at least Star level with his pencil (Created at least a star, desert, city, and ocean) | At least Dwarf Star level (Immensely stronger than his base, His rocket boosts alone shattered a massive meteors), Can bypass durability via Size Manipulation, BFR, Transmutation, Age Manipulation, and Existence Erasure

Speed: Massively FTL (Blitzed Big Nose many times, who has reacted to a beam of light from behind, and reacted to a frisbee which made several hundred loops around the earth in seconds before shooting off into far reaches of space, dodged several lightspeed lasers. Reacted to a light shot at him from a controller, can pilot ships and a suit that can cross the Solar System and Universe in short periods), Relativistic+ with his bike (His bike drove fast enough it shot into space and back in a few seconds), Massively FTL with golden sneakers (Made several loops around the planet and then too the moon and back to earth in a few seconds casually, The sneakers give speed that completely blitz Pink Panther's normal reaction), higher with Vitamin Pink (Powers up all stats) | Massively FTL+ (Flew from Saturn to the Sun in seconds, Can cross the Solar System and Universe in short periods of time. Flew on par and reacted to The Little Man's Ship which can cross the Universe in short periods of time)

Lifting Strength: At least Class 50 (Much stronger than Big Nose move a Massive truck and caused it to lift off the ground by jumping up and down, and momentarily was able to overpower a shark, lifts a safe casually, lifted a massive boulder, lifted a giant chest filled with gold), higher with Vitamin Pink (Powers up all stats)

Durability: Dwarf Star level (Comparable to his Attack Potency, survived a large amount of snow that covered a mountain being shot at him suddenly with no injury, Tougher than Big Nose's base form who survived an ice explosion seen from space and had the planet grow from pebble size to normal right in front of his face and survived mostly uninjured), higher with Vitamin Pink (Powers up all stats) | At least Dwarf Star level (Immensely stronger than his base, survived Big Nose's ship ramming into him)

Stamina: Extremely high (While he can be lazy, he has shown to be able to stay up for countless hours while working with little signs of fatigue, went months without any food; Ran around the planet and to the moon and back with little effort)

Intelligence: Genius (Is always shown to be extremely tricky and manipulative, as well as knowledgeable in many areas like mechanics, construction, and the creator of many devices and medicines, and had tricked The Little Man several times over who is smart enough to create several advance technologic devices as well as aliens smart enough to build machines that can turn people onto furniture, outsmarted a scientific genius and some of the world's smartest minds, has quickly adapted and figured out how to use advanced alien technology)

Weaknesses: When he starts running with his golden shoes, he has a hard time stopping without taking the shoes off themselves, which is a challenge.

Discord (My Little Pony) Discord's Profile (Pink Panther had access to all his equipment, Pink was bloodlusted, Pink had a day of prep, Speed was Equalized)