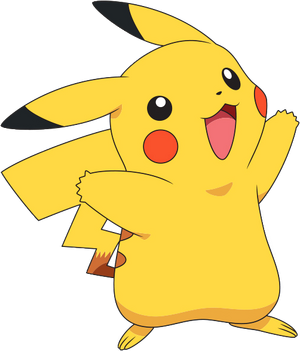 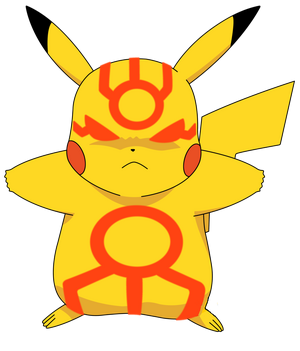 Pikachu is Ash Ketchum's main Pokémon from the Pokémon anime. Originally a reluctant member of Ash's team, when the young boy tried to save Pikachu's life from a flock of Spearow, he warmed up to Ash, and ever since then he remained an invaluable member of Ash's team, going through thick and thin to help Ash achieve his dream of being the very best.

Tier: At least 7-A. Higher with Z-Moves or when absorbing electricity | High 6-A

Attack Potency: At least Mountain level+ (Has defeated several powerful Pokémon, including Dragonites, Abomasnows, and Tyranitars, most of them being extremely well trained). Higher with Z-Moves or when absorbing electricity | Multi-Continent level (Can counter an attack from Kyogre, controls Groudon who was stated in the legend to have raised the continents)

Speed: Relativistic+ (Has kept up with and defeated top tier Pokémon of this caliber). Higher with Quick Attack (Used this move for many speed feats, the most impressive being seamlessly dodging all but 1 or 2 of the danmaku of Hariyama's All-Out Pummeling, when it would've been creamed otherwise) and Agility | At least Relativistic+, likely higher (Was able to react to an attack from Kyogre, controls Groudon who is vastly faster than non-Legendary Pokemon like Poliwrath and even Pokemon like the Legendary titans)

Striking Strength: At least Mountain Class+ (Clashed with Charizard's Dragon Claw using Iron Tail, although it has lost) | Multi-Continent Class (Scales to Kyogre, as well as has Groudon's exact striking strength as he controls him)

Durability: At least Mountain level+ (Took hits from Alain's Metagross and others Pokémon in their third stage of evolution) | Multi-Continent level

Stamina: High (Has participated in dozens upon dozens of battles while being the underdog) | Very high (Using Groudon, who could fight Kyogre for days on end)

Intelligence: Gifted when it comes to battle, due to sheer experience (Is currently on his seventh region). Has improvised a ton of moves, and has even been effective when Ash was nowhere to be seen | Should be relative to Kyogre and Groudon, who could fight each other for days on end and survive.

Weaknesses: Ground type moves and some moves that damage himself. His Blue Orb Absorbed form can cause Pikachu to blindly rage as well as severely drain stamina.

(Moves that Pikachu can learn and has used)

(Moves that don't even exist, but Pikachu has used)