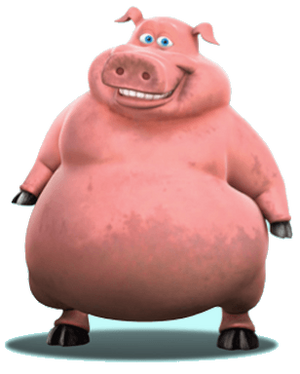 Pig is a main character in the 2006 Nickelodeon movie, Barnyard, and its televised spinoff, Back at the Barnyard. He is one of Otis' best friends. Pig is very well-mannered and serves as the voice of reason in his group of friends, but his intelligence leaves a lot to be desired. He is an avid lover of food and rolling around in mud.

Powers and Abilities: Superhuman Physical Characteristics, Toon Force, Regeneration (Mid. Reformed after having his head ripped off and placed on Otis' body), Plot Manipulation (Can delay the plot during perilous and suspenseful moments), Superhuman Digestion (Cleared an entire 5-foot stack of broccoli in 20 seconds, ate a cake that was laced with C-4 and dynamite), Flight via jet pack, Adhesive Manipulation via Moo Glue, BFR with his stomach (Can push people hundreds of meters away), Statistics Amplification (Can become stronger from drinking radioactive waste), Telekinesis and Electricity Manipulation in his ghost form, Duplication (Has a miniature clone of himself), Sound Manipulation and Paralysis Inducement via burping (Seen here), Summoning (As Ruler of the Moles, he can call in a mole army for help), Fragrance Manipulation (Can spray opponents with an atrocious stench that makes them recoil), Resistance to Electricity (Has shrugged off being tased several times)

Attack Potency: At least Wall level, likely higher (Can hurt Otis. Squished a group of coyotes that were stronger than Otis)

Speed: Subsonic (Can keep up with Otis. Cleared a giant 5-foot stack of broccoli on a plate in about 20 seconds. Can dig a pit 10 feet deep in about 5 seconds)

Lifting Strength: Class 5 (Comparable to Otis. Tossed a tractor in the air. Stronger than Snotty Boy, who can casually tip cows over)

Durability: At least Wall level (Survived eating a cake that was laced with C-4 and dynamite, with dynamite sticks having a megajoule worth of explosive energy. Took a beating from Krauser Krebs for 4 hours straight, who is strong enough to destroy walls and overpower Abby, who can wrestle crocodiles and lift up fully-grown cows. Survived having his foot caught in a bear trap, slamming into a support beam, having a spotlight fall on him, and having a boombox, bowling ball, safe, chainsaw, toilet, crossbow, baby, and cooler fall on him in a row. Withstood voltage from an electric fence that could injure Otis. He and his friends survived crashing into a chicken farm while on a surfboard. Shrugged off getting hit repeatedly by a metal pipe. Was fine after having an alien worm pierce through his stomach), possibly higher (Has survived the barn exploding and being completely demolished several times. Survived falling from hundreds of feet from a hot air balloon to the ground with no notable injuries. Can take hits from Otis)

Stamina: Very high (Ran around the entire city of Oedeville without getting exhausted, can consume excessive amounts of junk food in a few seconds and still function perfectly fine afterwards)

Intelligence: Pig is generally very forgetful, gullible, lazy and clumsy. However, in the episode Some Like it Snotty, he tricked Snotty Boy into thinking he was a girl. He also serves as the gang's voice of reason, is a talented baker, and is very fluent in Swedish.

Weaknesses: Very naive, can easily be distracted by food and attractive women. Incredibly lazy. Has an immense appetite, doesn't know when to stop eating and will do anything for food. His ghost form is weak to garlic.