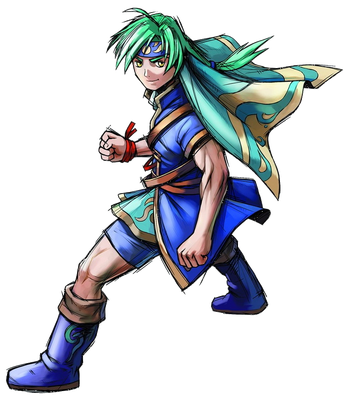 Piers is a Mercury Adept, and one of Felix's best friends. Felix meets him at a town called Kibombo during the events of Golden Sun: Lost Age. He was trying to get back his black orb that was stolen from him by ritualists. This black orb was essential for sailing his ship. He's from an ancient and advanced town called Lemuria, where people are said to age so slow, they seem immortal.

Age: Likely over 150. (Kraden is 70 years old and was considered young to other Lemurians. Was raised by Babi, who was over 200 before dying.)

Speed: Massively FTL+ (Superior to Iris, who can Iris fly at this speed)

Lifting Strength: Unknown. Class 5 with Psynergy (Can lift boulders with his Psynergy)

Intelligence: Gifted. Is said to have lived for over a century and is thought to be even older and wiser than Kraden. He's also been a sailor who traveled all over the world for long periods of time and has learned many secrets about the world. He's also an excellent fighter, strategist, puzzle solver, alchemist, and Psynergy Adept like the rest of his team.