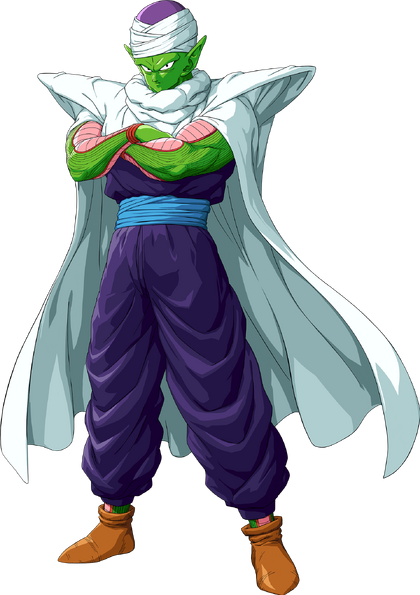 Piccolo is the reincarnation of King Piccolo, born with the simple goal of killing Son Goku and avenging his father at any cost. A wise, expert strategist, he was initially one of Goku's most ruthless enemies, but after training and bonding with his son, Gohan, in preparation for the arrival of the Saiyans, he began to become a better person, eventually joining the Z Fighters as one of their most skilled warriors.

Gender: Genderless, though referred to as male

Powers and Abilities: Master Martial Artist, Superhuman Physical Characteristics, Acrobatics, Magic, True Flight, Ki Manipulation (Can be used defensively and offensively, to strengthen his skin or to fire ki blasts, which can home in on targets, and form defensive barriers), Breath Attack, Ki Sensing (Can locate others by reading their ki and sense evil intentions), Enhanced Senses (Namekians have exceptional hearing, allowing them to hear things from great distances), Fusionism (Also knows the Fusion Dance), Body Control (Can control his severed limbs), Elasticity (Can stretch his arms great lengths), Size Manipulation (Can greatly increase his own size), Shockwaves Generation, Afterimage Creation, Danmaku, Electricity Manipulation, Creation, Sealing, Telepathy, Telekinesis, Cloth Manipulation, Accelerated Development (Training; Physical Stats, Abilities), Immortality (Types 1 and 3; inherited his father's eternal youth), Self-Sustenance (Type 2), Regeneration (Low-Mid; can regenerate his lost limbs and heal most damage as long as his head remains intact) | All other abilities, Duplication, Can possibly create dimensional rifts and destroy space-time and pocket dimensions with his energy via powerscaling, Resistance to Empathic Manipulation (Was unaffected by Ribrianne's Light of Love, which causes anyone who smells the aroma released by the attack to become infatuated with her and the other Kamikaze Fireballs)

Attack Potency: Small Country level+ (Razed a small continent with his Hyper Explosive Demon Wave) | Planet level (Destroyed the Moon with a single blast early into his training, and eventually far surpassed Raditz, easily one-shotting a Saibamen, and was the strongest of the Z Warriors to fight Nappa, slightly harming him with a Ki blast) | Planet level (Much stronger than before after training with King Kai), Dwarf Star level after fusing with Nail (Forced Frieza to use the full power of his second form without taking off his weighted armor) | Small Star level (Became a "Super Namekian" and easily overpowered Dr. Gero [even after he drained his energy] after taking off his weighted armor), Star level after fusing with Kami (Equal to Android 17), Large Star level after training in the Hyperbolic Time Chamber (Grew stronger than Semi-Perfect Cell and was shown to hold his own against a Cell Jr., even if inferior) | At least Large Star level (Surpassed his previous peak and is stronger than Goten and Trunks in their base forms) | Large Star level+ (Stronger than before) | Universe level (Was almost comparable to Frost, who in turn was almost comparable to Super Saiyan Goku, before becoming even stronger after training with Gohan)

Speed: Massively Hypersonic+ (His ki blasts are this fast, and he kept up with Goku, who could dodge and outspeed them) | Relativistic (Could fire beams at these speeds. Blitzed a Saibamen. Moved faster than Tien's reactions and kept up with a casual Nappa) | Relativistic, FTL after fusing with Nail (Could keep up with Frieza's second form and blitzed him after shedding his weighted clothing) | FTL+ (Should be superior to final form Frieza), At least FTL+ after fusing with Kami (Much faster than before) | At least FTL+ | At least FTL+ | Massively FTL+

Stamina: Very high. Piccolo's stamina is one of his greatest assets, allowing him to fight against Goku even when badly injured over the course of their fight and taking his most powerful attacks. He was able to fight against Android 17 for an extended period of time despite expending much of his ki, pushing himself to his limits continuously and fighting through increasingly severe injuries

Intelligence: Piccolo is an incredibly skilled and experienced fighter, growing further in wisdom and knowledge after fusing with Nail and then Kami. He is a strategic, careful fighter, playing dead to bait Goku into dropping his guard in their first fight, and acting like he was defeated to get information after Cell absorbed some of his energy and disabled his arm. He's also quite skilled at judging the strength and abilities of others and analyzing their abilities, quickly detecting that Goku wasn't at his best when he was fighting Android 19 and that Vegeta would be outlasted and defeated by Android 18

Weaknesses: Piccolo cannot regenerate if his brain is destroyed

Ki: The fighting power and life force of a martial artist, a tangible energy derived from the user's vigor, courage, and mind. It can be used in a number of ways, such as to surpass the limits of one's body to greatly increase in strength, and it can be fired as blasts of energy or used to create defensive barriers. Along with his Namekian heritage and Dragon Clan status, this is the source of Piccolo's superhuman capabilities and power. He is incredibly skilled in the art of ki control. He often fires powerful blasts of ki from his mouth.

Magic: As a member of the Dragon Clan, Piccolo has several magical abilities.

Namekian Physiology: Piccolo is a Namekian, a long-lived race of slug-like aliens with exceptional hearing. This grants him several abilities, most notably the power to regrow lost limbs and destroyed organs as long as his head remains intact. He can also extend his arms to great lengths to attack and grab opponents from a distance, and he can even use his regenerative powers to greatly increase his body's volume, growing significantly in size as a result.