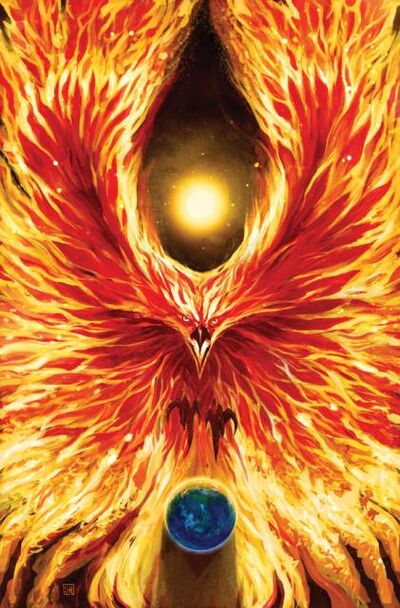 The Phoenix Force is the cosmic embodiment of life and all psionic energy, born with the beginning of the universe, representing all life that has not yet been born. It is the source of all psionic energy, and acts primarily through hosts, with its most famous being Jean Grey.

Age: Billions of years old (In every reality, it is born with the Big Bang at the beginning of the universe)

Attack Potency: At least Multiverse level+ (Superior to its hosts.), possibly Low Complex Multiverse level (The Phoenix Entity is the guardian of the M'kraan Crystal, aka the Nexus of Realities, which is a threat to all existence. and is the only one that can halt M'kraan's destruction.[1] Stated to be of creation and beyond reality.[2]) | Low Outerverse level (Exists on the same level of reality as other Multiversal Abstracts. The White Hot Room, which is located at the heart of the Multiversal Phoenix Force,[3] is the core of creation, all times, and no time,[4] and is also called the Nexus of all Realities.[5] Reed Richards refers to the Phoenix Force as one of the names for the energies of creation that made the Big Bang.[6] Firefrost stated that Marvel's first Big Bang created the multiverse.[7])

Speed: Massively FTL+ in a host (Using the Phoenix Force, Jean Grey can fly and travel across interstellar distances), possibly Immeasurable on its own | Omnipresent

Intelligence: The Phoenix Force is an ancient cosmic being with untold knowledge on the universe and life.