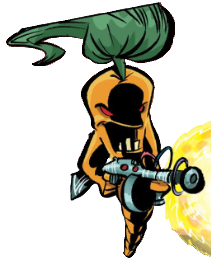 One of the members of the Brotherhood of Evil Produce. Was leading the Brotherhood until the Romaine Gladiator took over. Now he reluctantly works with his comrade Chili Chili Bang Bang so they can defeat Agent Kosher together.

Powers and Abilities: Superhuman Physical Characteristics and is a Skilled Marksman

Range: Below standard melee range to several meters with weapons

Weaknesses: Possibly still edible by stronger than 9-B opponents.

Retrieved from "https://vsbattles.fandom.com/wiki/Phantom_Carrot?oldid=6113818"
Community content is available under CC-BY-SA unless otherwise noted.