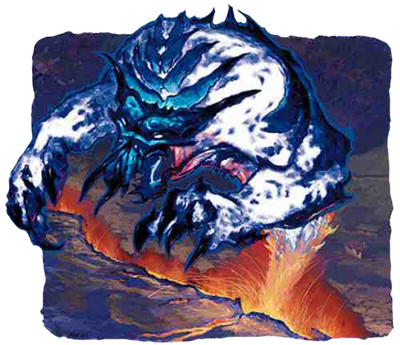 The unwanted progeny of Fire Gods, Phaethons burn with a hatred for all of creation. Most sleep in the core of worlds, bound there by the power of the Gods. But once every eon one breaks free from its eternal Geas to incinerate everything in its path.

Age: Varies. Some are at least a few billion years old

Speed: At least Hypersonic+, with High Hypersonic+ reactions (far above people who can avoid the spell Call Lightning and can tag individuals with the evasion feat).

Stamina: Virtually limitless (Even without a Divine Spark Abominations require almost no substance and can live for eons between needing them. With a Divine Spark they require nothing to live and cannot die from a natural cause)

Range: Extended melee due to size, hundreds of meters with spells, thousands of kilometers with heat aura

Intelligence: Below Average (Has an intelligence rating of 8 when the average human is rated as a 10)

Weaknesses: Frost based magic attacks are extra effective against the Phaethon. Phaethons are blind

Note: This profile assumes that the Phaethon possess a divine spark