For more information on the verse, check out the Petscop Wiki

Petscop is a fictional game and, aside from it being a Garalina, Sony and PlayStation product, not much is known about it. Petscop, while often filed under "creepypasta", it fits more inline with being an ARG/Web Series. It follows a semi-Let's Play style of YouTube video as Paul, the player, goes through the game (Petscop). Paul plays as the "Green Man", an anthropomorphic humanoid creature that lacks arms. While the game seems similar to Pokémon at the beginning, consisting of catching and collecting "Pets", the game becomes very different once Paul puts in a code that came with the game.

While quite mysterious, Petscop isn't that powerful of a verse. The pets have minor abilities like Pseudo-Teleportation and Water Manipulation, with tiers ranging from "Unknown" to "10-A to 9-C, possibly 9-A". Most characters ("Green Man" and NPCs like Quitter) don't go above "10-A to 9-C, possibly 9-A" physically with a variety of abilities (Most of which aren't used for combat). The most powerful characters is supposedly Marvin, who can kill and kidnap humans, as well as create and erase large cubes and walls.

Toneth
Add a photo to this gallery 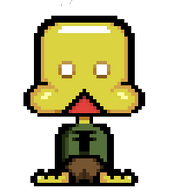 Marvin
Add a photo to this gallery