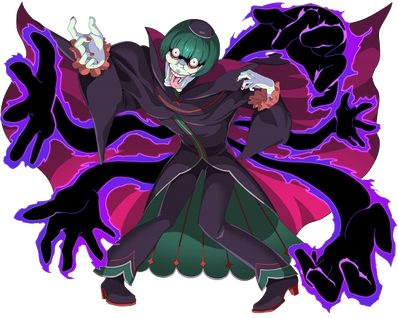 Petelgeuse Romanee-Conti was a Sin Archbishop of the Witch Cult, representing sloth.

Powers and Abilities: Superhuman Physical Characteristics, Forcefield Creation (Can create invisible force-fields in the shape of hands), Possession (He can only possess those with knowledge of spirit arts or those who are simply physically resilient. He cannot possess someone who already has a contract with another spirit), Earth Manipulation, Flight with the Giant Unseen Hands, Immortality (Types 1 & 6; Petelguese is a spirit that continues his existence through the possession of suitable bodies. If he is left without a body to possess he will die), Power Nullification (If the person he's possessing has any blessings their effects get removed by his Witch Factor), Invisibility (The Unseen Hands are invisible)

Lifting Strength: Unknown, Class 25 with Unseen Hands (Should be comparable to Wilhelm)

Standard Equipment: His fingers which serve as spare bodies for him to possess if he ever gets killed. The gospel which is a black book that lists the holder's future, it only lists vague details which lead to the future the holder desires.

Weaknesses: Completely insane and sporadic which can sometimes cause him to let his guard down in combat