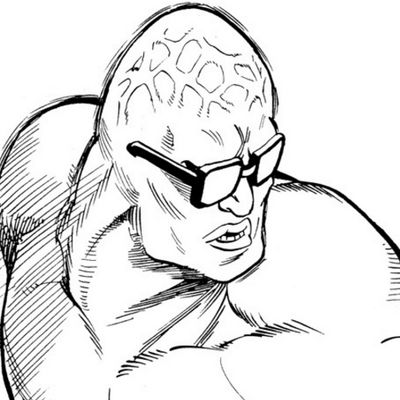 Personification Of A Light Pull Cord is one of the various, terrifying beings Saitama faced during his 3 year journey to becoming a hero. His origin story actually shares quite a few similarities to Saitama's, with both of their extraordinary powers forming from an obsession with training. Though whereas Saitama wanted to become the world's strongest hero, this monster wanted to become the world's strongest boxer.

Every day he would shadowbox with a light pull cord in his apartment. Eventually this constant training mutated him into an 8 and a half foot monster with more strength than he could've ever imagined. He felt that he was entitled to test this power on those weaker than him and would run around town beating people to death for amusement. His fun comes to an end, however, when the aspiring hero Saitama confronts him, and like most fights he's in, Saitama ends their match in just one punch.

Attack Potency: Small Building level (As a Tiger level threat should be superior to Piggy Bancon)

Speed: At least Superhuman (Able to intercept and hit post 1 year training Saitama from close range while his back was turned)

Stamina: Very high (Can fight at high speeds and go on constant rampages throughout the city without any sign of fatigue)

Intelligence: Highly knowledgeable and skilled in boxing, though otherwise he is rather simpleminded

Weaknesses: Is extremely arrogant and heavily overestimates/exaggerates his power, claiming himself to be a God Level Threat.

Start a Discussion Discussions about Personification Of A Light Pull Cord